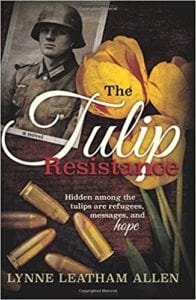 The Tulip Resistance begins in 1940 in the Dutch countryside before the German Army rolled into or over Holland and shows that life in the country was peaceful. It also, however, shows how easy it was when the Germans finally took the country using much violence to keep the people at bay so they could take over. The main character, Marieka Coevorden, is a local girl who has her chores to do in the morning, milking the cow, picking up eggs and making deliveries in the neighborhood. Her family, consisting of Mom, Dad and brother Bastiaan live, as you’ve probably guessed, on a farm.

There have been many, many books written about Hitler’s armies in WWII but one set in Holland is intriguing. Much of the story was told about the children and the differences in their lives before and after the German occupation of their homeland. At first the kids are playing and teasing each other and then, practically the next day, the livestock of the townspeople (chickens and pigs) are being taken from them by the army, a curfew is enforced, there is rationing of food and people are being attacked in the streets, especially Jewish people, and they have to run from their homes.

The resistance is formed and many people chose to help others even though they might be killed if caught. But everything comes to a halt for Marieka when she comes upon a wounded German soldier who is trying to defect and needs her help. She knows that if the man is caught with her she will be killed along with him and more than likely, her family will also be killed.

Quill says: This is a fine story of a young girl who, by helping the resistance, could be putting her whole family at risk. The extremely different storyline is definitely worth a read.