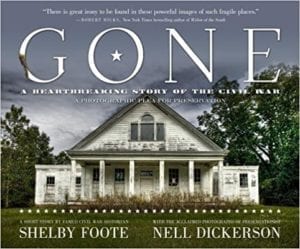 This book, and the fantastic "statement" it makes, will live long after we have all gone to our rewards. It is a beautiful narrative about the times leading up to the Civil War and shortly after, when all these lovely houses were burned to the ground...for what reason, I don't know. Maybe just to feed arrogance, and the fact that people wanted to own other people.

There is a memorable story told within the pages of this book, accompanied by many photographs of houses and churches and schools that were destroyed. The story focuses on some Union soldiers - two officers and troops - who were going through Mississippi and burning houses randomly, because they could. The Colonel of these troops had lost an eye in battle and he wanted people to pay for that whether they were responsible or not. So, as Sherman was marching to the sea, Colonel Frisbie and his troops were making sure that the civilian population were held responsible for the trouble brought on by the Confederates, by burning down every house they came across. He was heard to say to his Corporal, "They started this thing, Mr. Lundy. They began it, sir, and while they had the upper hand they thought it was mighty fine. Remember the plumes and roses in those days? Well, we're top dogs now, East and West, and we'll give them what they blustered for. Indeed. We'll give them war enough to last the time of man." So, he would send his troops into the houses to get the people out and then burn the houses down.

Along with this, there is a story written by Civil War Historian, Shelby Foote called "The Pillar of Fire." This is a fictional story about a family leading up to and after the Civil War. The troops finally get to this home and take no pleasure in burning it but, of course, they do. An elderly man and three servants are the only ones left to mourn the property and the cruelty that is involved will make us all remember this scene for the rest of our lives.

The photographs, by Nell Dickerson - a niece of Shelby Foote - will make you cringe. These once lovely houses and mansions are falling down, covered with debris and waiting to be restored to their former glory. It just seems such a shame that this war was fought amongst ourselves. There was no "Bin Laden," no "Fuhrer," just...each other - which makes The Civil War the most heartbreaking war in history. The pictures are not what you would expect. They are not of beautiful plantation houses but, of falling down wrecks that now need tender, loving care. The photos are moving and will live on forever. Hopefully, some of the places can be restored but, most look as if they have breathed their last. Dying images of a nation that, once upon a time, tried to kill itself.

Quill Says: Pick up this book, as it will be a collector's item someday. When you look at these photos you will wonder why??? Fathers against sons, brothers against brothers and, for what? It will make you stop and think.