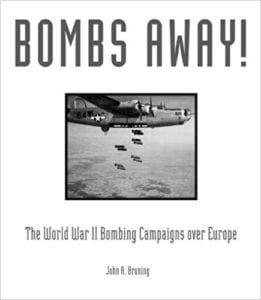 This book includes all air battles fought over Europe during the years of WWII and also includes some of the campaigns of WWI. The stories of battles that were fought decades ago by brave men from many countries across the world are still written about and told today. These air battles spread across the bullet and bomb strewed skies and destroyed thousands of aircraft built in the factories of many nations. Going down to their final resting places were men and boys of power, foresight and purpose. Some died fighting for the freedom of their country and some limped their aircraft into fields and waited to fly off in a few days to do the same thing all over again.

You will see the battlefield at Verdun that still shows the shell-torn landscape that has not and never will fully heal. There are many fields like this that will take you back to the huge struggle to control the skies over Europe during the years of trying to defeat the Nazis until the allies finally succeeded. You will see many of the places where these clashes took place for example: the off the beaten track of an old 8th Air Force bomber station, its runways cracked and covered with weeds; local museums in small and large towns filled with planes or memoribilia of a time that now exists only in old men's memories. But these men cannot tell the whole story of what occurred in the skies during those six years of WWII by themselves, the pictures in this book add so much to their stories. Using this book, you can be there when the Memphis Belle completed her last mission and when the Norden Bomb Sight was invented. It was said that this bomb sight could put a bomb in a pickle barrel from 20,000 feet. Also, read about Jimmy Doolittle, the Eighth Air Force commander and, of course, a brief glimpse of the crew who flew the Enola Gay to Japan. You will see history made in these pictures and narratives showing the V-1 and V-2 rockets that the country of Germany were making and the cities that were destroyed.

The skies are empty now and the pilots and crews who fought these violent battles above the burning cities of Europe are mostly gone to their reward, knowing that they fought to defend freedom in their countries. I'm sure that when they had flown a few missions the romance of battle paled and they realized that their futures looked grim indeed. The ones who got home carried a lot of baggage with them as they do today. Only Hollywood could find this glamorous. The reality of war shouldn't fade from our memories as these brave people fought for our freedom and should never be forgotten. This book will help keep those memories alive.

Quill Says: The author, John R. Bruning, has given us, in pictures and narrative, a true and concise picture of what these aviators went through to keep their countries safe from harm. Pick this book up and read it thoroughly. It is a real eye-opener.