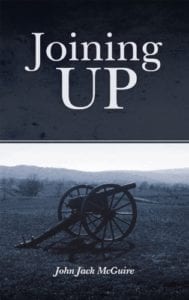 A Union Army Captain, Andrew Whelan, is in Brooklyn to check on his teenage brother Will who is in St. John's Home, before he goes on to fight in the Civil War. Will was placed in this orphanage when Andrew left for the Army and Andrew wishes to see him before leaving. He finds Will and a friend, Bob Ambrose, locked in a closet in the Headmaster's office. They had been accused of stealing food, which turned out to be garbage, and were about to be whipped. Or as Headmaster Gingrich puts it, "corporal punishment is an effective tool and I use it liberally." This does not bode well for Andrew, but, he is on short leave from the Army and at the time couldn't do anything about it. Although he is working with his Commanding Officer to have Will transferred to a boarding school in Brooklyn. The two boys beg Andrew to take them with him where they could become drummer boys for the famous Red Legged Devils of the Fourteenth Regiment (the name is a result of the Regiment's intense desire for battle).

Andrew leaves for his Regiment and the two boys plan an escape, after they have been beaten by Mr. Gingrich, and decided not to stay in the orphanage any longer. With their backs still raw from the whipping they received, they make their way over roofs and stables to come to the waterfront and find the ferry to New Jersey where they plan to set out for the Civil War battlefields. On their way, they meet a muleskinner, Dinky Dolan, and his helper, Daniel, a black teenager who runs supply wagons for a Regiment from Massachusetts. He is a character but treats them fairly well so they sign on with him to help them search for Andrew and the Brooklyn Red Legged Devils. They suffer many hardships along the way but it's nothing like the beatings they received when they were in the orphanage so they go on hoping to find Andrew. They are on their way to the rolling farmlands of Gettysburg, Pennsylvania where Robert E. Lee is waiting to send his armies of Northern Virginia to fight General Meade's Union forces. It will be the turning point of the war, and the boys are heading right into it.

The battle scenes in this book are fabulous. You feel as if you are in the midst of the fighting. There was much bloodshed recounted and as you read, you can feel the courage of these brave men on both sides who fought for their beliefs. There are conversations between great men, President Abraham Lincoln and Edward Stanton, his Secretary of War, and Robert E. Lee, when he was disappointed at the actions of General Jeb Stuart when he was late in arriving to Gettysburg. So many good men and boys died in this war and the reader will see some of that in this book. Readers who are Civil War buffs will enjoy Joining Up because it shows the real nature of battle.

Quill Says: The author is obviously a Civil War history buff and does an excellent job presenting battle scenes and the state of the country when this war was in progress. He has personalized the book and made it a very interesting read.