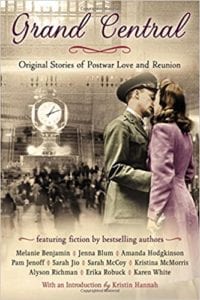 To say a novel is exquisite; to state that a short story is written so well it will stay with you forever - are examples of overstatements...in most cases. Yet, this is one review of one anthology that can claim both.

Grand Central Station, as everyone knows, is one of the most historic and stunning locations in this world. From the constellations high above to the huge clock that everyone has seen or stood in front of at one time; to the famed Oyster Bar, and the information desk that has been a small part in millions of lives – Grand Central has it all. And these particular stories each focus on those people and their stories, using one day in September of 1945 when soldiers were coming home, and both friend and enemy were starting new lives and accepting the changes that were created during WWII.

Alyson Richman introduces a character who plays his violin in the grandeur of Grand Central just waiting to catch the eye of a girl who is a delicate ballerina, as well as being a young woman who must deal with the fact that her home and her family has been left far behind. The loveliness and emotional beauty this duo bring to the pages is unforgettable.

From then on out, the reader is given amazing tales that include a man with a ‘tattoo’ forever marking him as a prisoner-camp slave, who is now living among the wealthy and attempting to discern and deal with bias and pity. There are tales that bring a WWII soldier home who wishes the woman from his past would disappear and take her German-born workers with her. A young girl wishing to be an actress waits in Grand Central for the big audition that will change her life...in ways she could never have imagined. From European women coming for the beaus who basically brought them over to play housewives, to women who were part of Hitler’s program to increase the perfect Aryan nation; and, the incredible Pam Jenoff (author of The Kommandant’s Girl) brings her own amazing tale of a strand of pearls that readers will never forget.

These are just a few mentions from this wealth of incredible tales, but the most beautiful aspect of this anthology may just be the fact that the violinist’s melodies flow through each and every story, as if tying each life together as if they were one in the unforgettable location of Grand Central Station.

Quill says: This anthology brought together the absolute best to achieve literary greatness, and they most definitely did just that. A Masterpiece!