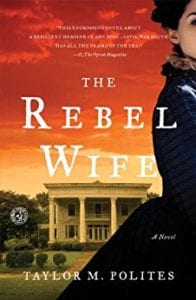 This is a new novel of the South during reconstruction times in Alabama following the Civil War. A fascinating tale that takes us through an era that turns the gentleness of the pre-war times in the south into an era of hatred and betrayal among the rebuilding of the Confederate states.

The heroine of this story, Augusta Sedlaw Branson, called "Gus" by all, is the daughter of a once wealthy family that was left in total poverty by the Civil War. Her parents are dead. One brother was killed in the war and the other is not much help to her at all.

Alone and weary when the war is over, Gus marries Eli Branson. Eli is a very wealthy man and he will definitely keep her in the style she is accustomed to. They are married for ten years when Eli dies from a mysterious fever. After his death, Gus learns that Eli was not as well off as thought and he left his wife and child with many debts. Along with her cousin Judge Heppert, a lawyer, Gus has hopes of rescuing something from the estate. Gus also learns that Eli was not very popular with the locals and that he was involved in some shady business dealings. Gus's hired man, Simon, tells her that Eli has left a package containing a large amount of cash. She looks all over the place for it but doesn't find anything. Meanwhile, Judge is growing unhappy because he wants the estate for himself.

Gus has a tenuous relationship with Simon and her recendly freed slaves. Gus, who was raised in the pre-Civil War when master and slave were reality, does not fully understand and is very uncomfortable living with "these people." The only person she seems to really trust is her houskeeper, Emma. In order for her to survive, Gus has to try and move forward with her people and find a way to get along. Gus has her hands full trying to make a home for her son, keep her cousin Judge happy and deal with Judge's son Buck, who has romance in mind.

Quill Says: This is a good read that doesn't nurture lost causes. It brings the Reconstruction Era to life and goes into the life of a Southern Belle who certainly didn't foresee her life as it became.