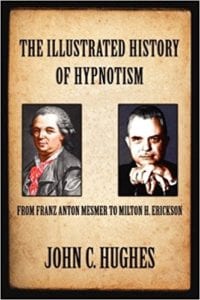 If you are looking for a comprehensive history of hypnotism, then this is the book for you. John C. Hughes, a notable expert on the subject matter, provides the academic and curious reader with a well-researched, well-written and thorough work on how hypnotism has traveled to its current status as a professionally accepted mode of therapy.

Hughes starts with the Greek temples of sleep, and travels through Mesmer’s key contributions, to those of his disciples and subsequent practitioners, to Erickson’s modern day role in the development of the practice. Each historical figure, relevant region and time period are drawn in detail, analyzed and assessed.

Hughes goes into great detail regarding every step in the evolution of hypnotism and even pins down major players’ appearances and personalities. One impressive example is his portrayal of 19th century British doctor John Elliotson, characterized as “Short and lithe, dark-hared and dark-complexioned, with piercing black eyes, he gave an impression of being imbued with electric energy as he strode with agility around the lecture stage, emphasizing his points with passion and sincerity.” This depth of description adds dimension to the journey Hughes takes us on. He is also quite adept at integrating the relationships hypnotism has had with political and literary movements throughout the years, which improves our understanding on all fronts. The book even touches on various writers, such as Alexandre Dumas, Percy Shelley and Charles Dickens, whose lives and works were somehow affected by hypnotism.

The Illustrated History of Hypnotism is a 400-page journey that is sure to add new knowledge, even to the reader who is well informed on the subject matter. Although this is a text that would be very appropriate for academic, reference and research purposes, it is a book that can easily be consumed by anyone who has a strong interest in the subject matter.

Quill says: An excellent authoritative text on the history of hypnotism.

For more information on The Illustrated History of Hypnotism, please visit the book's website at: www.NGH.net