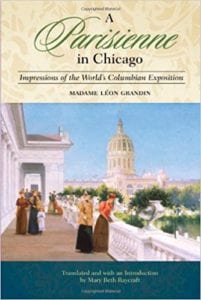 Chicago—the Windy City, the Second City—didn’t even exist in 1800. Founded in 1833 near a portage between Lake Michigan and the source of the Mississippi River, Checagou was first a French trading post. Within a decade, the first railway opened in Chicago, and then the Union Stock Yards were established in 1865, making the city, as Carl Sandburg wrote in 1916:

If that weren’t enough, the sprawling, brawling city burned down in 1871 and promptly rebuilt itself. In 1893, when the city hosted the World’s Columbian Exposition, it already had skyscrapers. And it wasn’t even a century old yet. The Exposition, which celebrated the four hundredth anniversary of the “discovery” of the New World by Christopher Columbus, was visited by tourists from all around the globe.

One of these was Marie Lédier Grandin, wife of the sculptor Léon Grandin, who came to assist American sculptor Frederick MacMonnies with an elaborate fountain. While her husband was thus occupied, Mme. Grandin explored the city. Her journal, which was originally published in Paris in 1894, offers her observations on their sea voyage from Le Havre to New York, their trip on the Michigan Central Railroad from New York to Chicago (with a thrilling stop at Niagara Falls), and their adventures in and around Chicago, plus a sight-seeing trip to view a great fire in Milwaukee. She describes the several boardinghouses they lived in (with their skimpy American meals and amazing folding beds), social life in the city, and schools, streets and shops, including the Loop. She also takes us on a tour of the Exposition itself and comments on the Women’s Exhibition, the Woman’s Building, the Children’s Building (which provided babysitting to visitors), the Horticulture Building, the Palace of Transportation, the Palace of Mines, the Electricity Building (which had Edison light bulbs in its walls), the Palace of Agriculture (which had “an army of windmills that would have resuscitated Don Quixote”), the various exhibitions set up by the nations of the world, and the Ferris wheel, which was Chicago’s answer to the Eiffel Tower. “I am not afraid to say,” she concludes, “that this exposition in Chicago, which was so criticized, was marvelous and superior to all previous ones. With [France’s] meager resources, we could never equal its splendor” (p. 139).

A Parisienne in Chicago opens with a fact-filled essay by Arnold Lewis on the “Shock City of the Age” that sets the city and the exhibition in the social and historical context of the 1890s, a period of transition in the United States. Although many visitors to the Exhibition wrote about their experiences, Lewis writes that Mme. Grandin’s story was “distinctive in its focus, tone, themes, and, ultimately, in the transformative discoveries she made during her stay” (p. ix). Following Lewis’s essay is the translator’s introduction, which tells of Mme. Grandin’s life before and after her ten months in Chicago. The book also contains twenty illustrations from archival sources and the juiciest footnotes in the world.

A topic that Mme. Grandin returns to several times is relations between men and women in America and France at the end of the 19th century. Considering what we hear in the news today about relations between the sexes, we might wonder what reality she is describing. Here are two of her comments:

"A young American man views himself as the young lady’s protector and behaves much like our chivalrous knights of the past. Devout and devoted to their ladies, they honor rather than abuse the trust placed in them (p. 58)."

"After having seen American women, my sisters, treated with respect, their burden lightened by their husbands and helped and admired by men, I was going back to a place [Paris] where women are all treated like animals, delicate animals whose moral value and intelligence are not taken into consideration (p. 143)."

After you read this book, you might want to further explore the topic. Rent In Old Chicago (1937), starring Alice Faye and Tyrone Power. It’s about Chicago politics and the O’Leary family, whose cow kicked the lantern that started the famous fire. Rent Meet Me in St. Louis (1944), which is about the Louisiana Purchase Exposition of 1904; society hadn’t changed between 1893 and 1904. To learn more about Mme. Grandin’s culture, rent the charming and melodic operettas of Jacques Offenbach or Sunday in the Park with George (1986), which is partly about the late 19th-century French art.

Quill says: If you like history and biography, you’ll love A Parisienne in Chicago