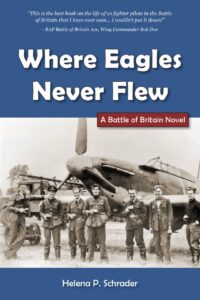 I’m absolutely giddy about the decision to re-release this book. Why? Simply because if you did not get the chance to enjoy this spectacular read when it was titled Chasing the Wind: A Story of British and German Pilots in the Battle of Britain a few years back, then you now have the opportunity to delve into one of the best historical works to appear in a good, long time.

This release marks the 80th anniversary of the Battle of Britain, and this author does an incredible job by taking on both the German and English point of views when it came to the strategies they created in order to win. She also was able to deftly present the emotions of each person and show how they handled the celebrations and losses they felt, like the perfect ‘human’ chess game unveiled to the public.

In the telling, Helena Schrader opens the world to the early days of WWII, first placing us in Dunkirk to see the Battle of France end, before heading to Britain where their storied battle came to pass. We meet a menu of characters who will lead us through the story, like Robert “Robin” Priestman, RAF aerobatics pilot. We learn of a true flaw that he has to deal with on a daily basis. When stress hits him hard, he stops seeing the fact that he has limitations like any other normal person does, and tends to cross the line. The Air Ministry is already down on the man because of a mistake he made related to the King’s Regulations. And even though he has compiled a good service record when fighting with a squadron in France, it is the Battle of Britain that sticks his body in Training Command, and places his heart in danger as he falls deeply in love with a woman from The Salvation Army.

No. 606 (Hurricane) Squadron is still trying to come back from the losses they incurred over Dunkirk. Although new pilots join every day, the squadron’s morale is low and their resentment of these newbies runs deep as they continue to mourn their now dead friends. But in the end, the goal of the RAF is to make sure that the hideous Nazi flag never finds a place atop their beloved Buckingham Palace.

Their monster nemesis, however, the Luftwaffe, will do anything to stamp that dreaded swastika on every front porch of every house in Britain. They have plans in place, and are even recruiting women as communications specialists to help them in their fight.

Enter...Klaudia von Richthofen. A sweet, inexperienced female who is recruited by the Luftwaffe Women’s Auxiliary. She is not only seduced by a man who she should run from, but also finds herself falling for one, Baron von Feldburg. Who she doesn’t seem to recognize is Feldburg’s wingman, Lt. Ernst Geuke, who has eyes only for Klaudia and wants her to see him as more than a secondary character in her life. Of course, it doesn’t help Ernst that, next to these handsome men, his face and body and background simply don’t measure up, causing it to be nearly impossible to catch Klaudia’s eye.

Page after page we have pilots risking their lives on both sides of the Channel in order to call themselves heroes when the dust settles on the battlefield. Following both the females and the pilots, readers really get to know all the characters while they are off-duty and showing their more vulnerable sides. One of the most interesting parts of this book was the fact that even though I was intrigued by the RAF and their support, I was equally intrigued by the German Luftwaffe members. The author did a fantastic job of showing that death and the emotional aftershocks of losing someone has no boundaries. In fact, she showed that much like the North and South during our Civil War, both sides of the Battle of Britain went through the same type of pain, loss, and love – and each side worked just as hard to achieve success.

In addition, another attention-keeper was when the author vividly showed the “walls” that most assuredly are still seen in daily life: The hatred that flows between the poorer working class and the officers; the fact that no one is invincible, no matter what country they hail from or what flag they fly under; the fact that you may feel like the “supreme power” yet, in the end, the classic scrappy dog fighters who will never stop until they break the ‘big man’ continue to win.

This author struck gold with this story. You can now read what you perhaps missed the first time around, while all those readers who are already in love with this woman’s writing can go back and read this tome once again and enjoy it even more. The human side of war is intense and the detailed descriptions of the crafts and the fights were so vivid that they pulled me back in time...everything found in this book brought this somewhat overlooked battle to life.

Quill says: I cannot recommend this highly enough. Do not miss this memorable, intense, amazing story.

For more information on Where Eagle Never Flew: A Battle of Britain Novel, please visit the author's website at: helenapschrader.com