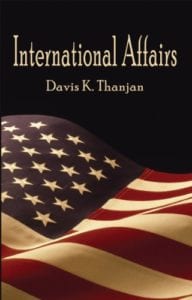 In his new book, International Affairs, author Davis K. Thanjan sets an ambitious task – to examine international affairs by analyzing every country in the world. His aim is to show the reader that natural resources, trade, internal and external threats, and other issues specific to each country will, in large part, shape their foreign policy and affect international relations.

The first few chapters of Thanjan’s book offer an overview of the entire world, giving detailed statistics on such things as population density, water and oil resources, and gold reserves as well as various countries’ desires to stake claim to the rich resources of both the Arctic and Antarctica. Next we’re given a look at world organizations such as the United Nations, followed by a chapter on international organizations including the European Union and the Gulf Cooperation Council.

Next up in International Affairs is a look at countries around the world and their place in transnational relations. Thanjan first explores the United States and its place in the global community. He discusses a myriad of topics from the pursuit of freedom to the vast natural and manmade resources available to those living in “the most powerful nation in the world…” (pg. 43). There is an extensive discussion of military spending and the repercussions this build-up of military strength has had throughout the world. The author also presents thoughts on topics as varied as immigration and Ground Zero sensibilities.

Then it’s on to other countries in North America, in which the author has included countries located in Central America. We get a look at places as diverse as Belize and Canada in this chapter. With just ten pages devoted to the nine countries within the confines of North America (excluding the US, of course), it’s not possible to go into great detail about any one country. For each nation, an overview of their socio-economic affairs is given, followed by that country’s relations with the U.S. There is varied information in these overviews, from a look at border disputes, to crime and international agreements that some of these countries have signed.

There are 13 more chapters in International Affairs, covering all spheres of the world. Northern, Southern, and Eastern Europe each have their own chapter as does South Asia, East Asia and even Oceania. The author has been quite thorough in including every country in this book and there is a variety of information within its pages. We learn of the tiny country of Lesotho, completely landlocked by its neighbor South Africa as well as all the countries that were once part of the Soviet Union. There’s even a section devoted to a group of islands in the Indian Ocean that make up the country of Comoros. Just flipping through the pages of International Affairswill give the reader who is lacking in geographical knowledge a good starting point on world relations.

While the author is to be admired for undertaking such an ambitious task, there are some underlying problems with International Affairs. First, the book has an abundant number of facts and figures. This is, of course, what you would expect of such a book. However, in no place are the original sources of these statistics given. At the front of the book, there is a notation that “…data provided here are not absolute numbers and are subject to variation according to the agencies compiling the information.” (pg. vi) A listing of those agencies and specific studies would have been helpful to determine the validity of the statistics provided. The author also interjects a fair amount of personal opinion that may offend the sensibilities of some readers. While discussing the UN, he states, “The affluent countries wash their hands off the UN peace keeping by contributing money supplying very few peace keepers,” (pg. 15) and “The capitalist country of US has degenerated as a socialist country…” (pg. 57) It is also clear from those two examples that the book needs the careful eye of an editor.

Quill says: An ambitious attempt to examine how every country's resources determine how it will act in the international community, heavily laden with personal opinion.

Learn more about International Affairs, at the publisher's website: www.bookstandpublishing.com