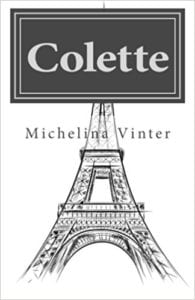 It’s the Summer of 1938, in the City of Light. In this well-lit and much beloved city, a young lady by the name of Colette, and her friend Anne, have just finished their exams. They are celebrating the fact that they are newly graduated corporate secretaries. They both have jobs lined up and the world is most definitely their oyster. Now, readers will recognize the date and place; 1938 in Paris is the setting for the veil of darkness that’s coming in over the people as WWII opens its eye on the world.

On her first day, after completing her schooling, Colette meets Adam Walker in Paris, a professor of political science in California. They fall in love and in a few short weeks are married and on their way to the United States. The first stop is the only stop for most visitors, New York City. This is where Colette meets her new in-laws before heading on to California. Colette soon discovers that she is going to have a child, and suddenly her life is a blessing and she’s walking on air.

Adam, however, is not over the moon because he didn’t want children so soon…maybe not ever. Colette soon realizes that Adam is not the man she thought she married, as he becomes verbally abusive to her and has a few girlfriends on the side to keep him amused. She is trying her very best as she goes through a lonely pregnancy, with few friends to help her except for a couple who run a small grocery in her neighborhood and a young Asian man, John Wu, who looks after her and luckily is around when the child is born.

In time, the war begins and life changes. Adam is working for the government in some sort of intelligence job and is sent to Europe. Colette is asked to come to war torn Europe to help the French Resistance, namely her brother, who is a spy. This is the turning point where the plot changes and many things start to happen. Colette lives a life of secrecy and joins the Freemasons, which gives her a lot of friends stuck in all sorts of situations.

The story starts to get a little more exciting as Colette goes on her journey through the War and afterward, offering readers a novel full of romance, suspense and intrigue. There are twists and turns that make the plot a bit different than the usual war stories.

Quill says: This new romantic/thriller is not your usual war story and while it's rather slow early on, it does pick up.