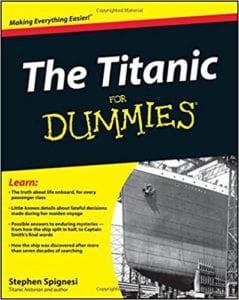 With the 100th anniversary of the Titanic’s sinking looming (April 14-15, 2012), there will, no doubt, be a myriad of books published to commemorate the event. The popular “Dummies” series, which has published books on such varied topics as meditation to stock investing, has jumped into the fray with their offering, The Titanic for Dummies. For those intrigued by the legend that is the Titanic, this is one book that will put everything neatly together in an interesting and educational package.

The Titanic for Dummies is broken up into six parts - A Century of Legend, The Titanic Sinks on its Maiden Voyage, Exploring Enduring Titanic Mysteries, The Quest to Recover the Titanic, The Titanic in Popular Culture, The Part of Tens (short chapters with top tens lists). The chapters within each part examine just about everything you could think of related to the giant ship from what passengers ate, how they entertained themselves, the sinking, the investigations (including testimony), and even debunking myths.

While there are not many photos in this book, that’s truly the only thing I would change. The book was well written and for anybody interested in the topic, it will prove fascinating. The sections with background on passengers and their fates, as well as survivors’ accounts, lend a realism that proves quite haunting. The history of the Titanic isn’t simply a history of a ship sinking, but of lives lost, families torn apart, and the aftermath of what surviving such a horrible night had on so many people.

Quill says: Author Stephen Spignesi is to be commended for putting together such a complete, fascinating, insightful book that examines every facet of the Titanic.