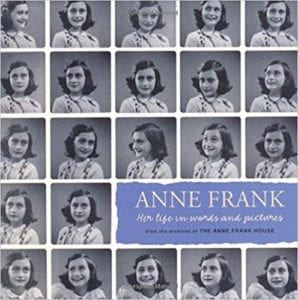 The family left Germany and emigrated to Holland in 1933 because the anti-Semitism in Germany, although it hadn't even peaked, gave Otto Frank grave concern for the safety of his family. For a time life was simple and his daughter Anne continued to be a lively, gregarious girl whose main interests lay in her friends and school work. Underlying political factions continued to roil the peaceful lives of the Jewish population of Germany and its spidery web reached out to Holland. When the "mailman brought a call-up notice for Margot," Anne's older sister, it was time. Time to go into hiding to escape deportation and possible death for a razzia, or raid, that could happen at any time.

The Frank family, Otto, Edith, Margot and Anne moved quickly to their new home in the Annex. Even Anne's cat Moortje had to be left behind. The Annex soon filled with the Van Pelses and Fritz Pfeffer. It was time to wait, to be silent and to hope that the madness would end. Anne began to document her new life in her diary and later found comfort in talking to Peter. The day to day details she wrote to "Kitty," a pet name she created for her diary, carved a unique niche in history, the perspective of a child in war torn Europe. On Friday, August 4, 1944, life as they knew it in the Annex ended because the "group in the Annex had been betrayed." What would happen to these people who tried so hard to survive their only "crime," the crime of being Jewish?

Most young people read The Diary of Anne Frank at some point during their school years and since I read it, I have come across or read a few books about the family or participants in their plight. Somehow this book touched me more than all the others. I really welcomed the intimate glimpse into the Franks' family photo album. There were numerous photos I had never seen before and this aspect pulled me from thinking about one young girl and gave me the entire picture of those struggling in the Annex. Reading the book as a parent gave me further insight and sympathy for Anne's parents and the pain Otto felt when Miep Gies handed him the diary saying, "Here is your daughter Anne's legacy to you." It was a shock to us as well and takes us beyond Kitty and the diary into the misery and madness of those times and asks us to ponder human rights.

Quill says: This is an amazing book that you really should not overlook.