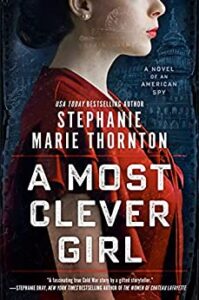 A Most Clever Girl is a fictional story of an historical figure that begins in November of 1963 when Catherine Gray shows up at the Connecticut apartment of Elizabeth Bentley. Catherine has one goal in mind - she plans to end the life of Elizabeth and herself as she holds Elizabeth responsible for wreaking havoc on her life. She considers Elizabeth a traitor to the United States and wants Elizabeth to admit her guilt of being a Russian spy and Communist.

Elizabeth is able to convince Catherine to hold off on passing judgment until she first hears her side of the story about her life as an American spy and member of the Communist Party of the United States of America (CPUSA). The story switches to 1933 when Elizabeth begins the story of her involvement with the CPUSA. Elizabeth joined the Party because she believed the rhetoric espoused by her best friend, Lee Fuhr, and to safeguard their friendship. However, that friendship was terminated as soon as Elizabeth agreed to work for the Communist underground. Yasha, a founding member of CPUSA, trained Elizabeth in the intricacies and complexities of an agent’s life. The two of them developed a friendship that turned into a secret romantic relationship.

Things soon turned bad and Elizabeth experienced an emotional downfall. To make matters worse, the Party had different ideas about Elizabeth’s future involvement as a spy. They wanted her to turn over all her contacts, but Elizabeth rebuffed their efforts. In 1945 she made the decision to defect and became an informant for the FBI. This led to unexpected repercussions, such as disbelief in her testimony as a government witness and character defamation. Soon, family secrets will be revealed that may just help Catherine...

Stephanie Marie Thornton has written a captivating fictional story that provides readers with insight into the reasons behind Elizabeth Bentley choosing to become a spy. It also looks at how she dealt with the challenges she faced in living a life full of secrecy, lies, subterfuge, isolation, heartache, and loss. The book is split into three parts focusing on different time periods and stages in her life. Before each section is a quote from Bentley’s book, Out of Bondage, and each excerpt wonderfully ties in with the story. A nonfiction book list is included for anyone who wants to learn more details about Elizabeth Bentley’s life as well as thought-provoking discussion questions which are an ideal catalyst for insightful conversations with others. A Most Clever Girl, which includes profanity, is an eye-opening book about Elizabeth Bentley and how the choices she made impacted not only her health and well-being but also the relationships she forged with others.

Quill says: A Most Clever Girl is a compelling historical fiction novel of a little-known female American spy for the Soviet Union who defected and had a significant effect on Soviet espionage in the United States.