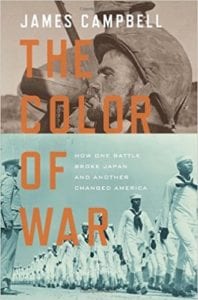 In this very emotional and inspiring true story (which is really two stories) of the World War II era, readers will be horrified at the harm that was suffered in the struggles to neutralize the Japanese in the Pacific. One of the stories is of a victory that turned the tide in the War in the Pacific and the other a really sad commentary on the relationships between black and white during wartime, when all should have been fighting for the same goal.

When the United States was attacked by Japan on December 7, 1941 the President called for war against Japan and tons of young men and women showed up at recruiting stations all over the country. The local recruiters filled the heads of these young people with tales of hope and glory of standing on the front lines with rifles ready to blow the enemy away or serving on a ship that would go into battle in the Pacific. Many young African-Americans did just that along with their white counterparts but things didn’t work out all that well for them. If the recruit went into the Marines, they were kept in the states working with a unit in the swamps or sent away to Saipan, an island nation in the Pacific, to work in a supply depot. Many of the recruits decided that they would join the Navy and work in San Francisco at an ammunitions depot; a place that would remind one of a prison camp or a plantation where white officers order the black troops to handle the ammunitions.

Getting a little ahead in the story, it is the night of July 17, 1944 and two American Admirals, Ernest King and Chester Nimitz, have just won a victory in the Battle of Saipan. This is a little known battle in the war but according to historians was "as important to a victory over Japan than the Normandy Invasion was to victory over Germany." As the two Admirals were celebrating the end of the battle in Saipan, the Port of Chicago Naval Ammunition Depot near San Francisco blew up with the force of an atom bomb. Most of the men who perished in this conflagration were black sailors, who worked extremely difficult hours loading ships with these deadly ammunitions that had been essential in the battles for the Pacific Islands. The US Navy did not talk about the sacrifice that these men and their families had made to the armed forces and blamed them for the accident. When the men who were left were ordered to start loading the weapons again they refused and the Navy brought them to trial on charges of mutiny. The men were found guilty and Thurgood Marshall, a future Supreme Court Justice, handled an appeal for the accused that was one of the beginning salvos in this country’s civil rights battles to come.

Although World War II went on for another year, things started to change in the methods of the fight. During that last year there were many serious battles, there was the coming of the B-29 that carried the largest amount of ammunition and, of course, the Atomic Bomb.

Quill Says: It’s too bad that the bad guys (Hitler, Mussolini, Hirohito, etc.) get all the press about WWII as there were tons of books, and still are, written every year about this era. Now, at last James Campbell has written about some of the little guys who worked to save the country and never got any credit for it whatsoever.