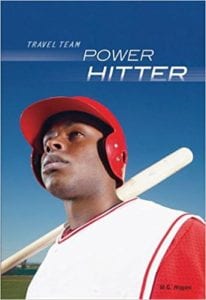 After TJ was seriously injured, the Las Vega's Roadrunner's coach Scott Harris decided that it might be best if the team entered a wooden tournament. In practice, when Carson Jamison pitched him a high and tight heater, Sammy Perez knew he was in trouble when his hit drew an easy out. He was a power hitter who was weaned on composite bats. The up and coming tournament in Austin was all-wood and Sammy knew he was going to be in trouble. When he chucked the bat down the third base line, Coach Harris was none too happy with him. It was only his first day using a wood bat and he had a long way to go. A very long way.

Gus Toomey and Alexander Jamison had it easy. Their families had money, but Sammy's struggled. It really was a sacrifice for his family to keep him in the Roadrunner's elite traveling team, but his dad thought it was worth it. Sammy's dad, Tony, was once a player and wanted his son to hit the big leagues and wasn’t happy with the all-wood tournament. "You need that sweet spot, Sammy. You're a power hitter. It's what you do." Not really, it wasn't what he had to do. He had to do wood because that's what the Austin tournament was all about.

Sammy dreamed of the day he could make his family proud and give them everything they wanted. It was hard to believe that a piece of maple or ash stood in his way. His dad had hinted at PEDs, performance-enhancing drugs, but just the thought "made his stomach clench." Sammy grew tenser the harder he tried and the more he failed. When his temper flared, Coach Harris's patience lessened. "Cool it, Sammy! I don't like hotheads and neither do big-league teams!" The scouts were coming to that tournament…the "MLB, Big 12, PAC 10, SEC." Sammy's confidence was failing him and everyone thought he was deliberately blowing the games. Would PEDs give him the edge or would they boot him out of the game he so loved?

In this tale Sammy Perez, a boy who has long had aspirations of hitting the majors, is in a terrible batting slump. The story tactfully deals with the sensitive subject of PEDs. The lure of an easy way to solve his problems frightens Sammy, but at the same time he wants to get ahead and save his family. The tale will have high appeal to young baseball fans from the ages of 9 to 12, including those who are also reluctant readers. The negative consequences of PEDs are made clear, but the book refrains from being preachy. This is a thought-provoking baseball tale, but a good one that young fans and players will enjoy.

Quill says: This is a high-flying story of Sammy, a hotheaded power hitter who is considering performance-enhancing drugs.