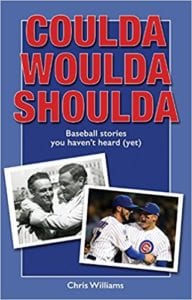 Sports writer Chris Williams has put together an assortment of his own essays on events within the world of baseball in his newest book, Coulda Woulda Shoulda.

A collection of twelve essays, covering a broad range of topics that span the early years of baseball right up to the present, pepper the pages of Coulda Woulda Shoulda. The author presents thoughts on why certain teams, or players, won or lost, compares relationships between certain players, and adds a bit of personal experience to the book as well. There is some statistical analysis included too, but not so much as to overwhelm the essays.

The book opens with the “bromance” between Cubs players Kris Bryant and Anthony Rizzo and compares it to the friendship between Babe Ruth and Lou Gehrig. With a brief comparison on these two friendships and what they have in common, most of this essay, “Bookends Buddies,” concentrates on that second relationship. It was interesting to read about the “several years of bliss” followed by how “...things began to sour.” (pg. 6) I was familiar with the ups and downs of the relationship of “The Bambino” and “The Iron Horse,” but had not read about the real reasons behind the bumps in their years playing together.

Other essays tackle different teams and players that offer food for thought (did I mention the author noted his mostly successful attempt to stay away from clichés?). In “Mob or No Mob,” Williams points out that part of the “proof” people use to prove that the “Black Sox Scandal” was true, was that the Chicago White Sox were vastly superior to the Cincinnati Reds. Williams argues that this isn’t true and in fact unfair to the 1919 Reds and proceeds to pinpoint reasons why the Reds were, in fact, a very strong team. He uses a similar argument in “Curse or No Curse” where he discusses the 2016 World Series teams.

My favorite essay was definitely “My First Baseball Thrill” (a close second is the last essay that replays the words of the author’s great-grandfather’s time playing baseball). Instead of discussing famous players, or games, the author recounts his best baseball memory – that of attending a doubleheader in Philadelphia with his father. While his team, the Phillies, lost both games, the memories made that day in 1967 are still cherished. We can all remember a similar fond baseball memory and it was fun to share that day with the author.

Coulda Would Shoulda is a brief (108 pages) book and each essay can be read rather quickly. There’s no terribly deep analysis of any one topic, but as the author admits, he hopes that his book will provide a jumping off point for further discussion among friends. To help in those discussions, the author has provided several pages of source material for each essay at the back of the book. If you’re looking for a fun, light baseball read, this book might just fit the bill for you (another cliché!).

Quill says: An easy, quick read that may get you thinking about various events and players within the world of baseball.