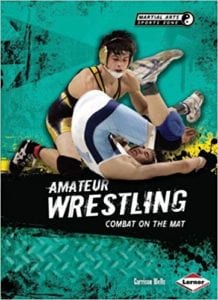 If you are a fan of amateur wrestling, you may have heard of Henry Cejudo. He was a champion high school wrestler who had dreams of being in the U.S. Olympics. Henry's dreams became reality when he took on Tomihiro Matsunaga and edged him out of the competition and became "the youngest U.S. wrestler to win an Olympic gold medal." Wrestling is when one opponent goes up against another to fight by "using their bodies to win points or to pin [them] to the mat." There are three different types of amateur wrestling: folkstyle, Greco-Roman, and freestyle. The latter two are the most common types, types that you may learn in school or in a wrestling club.

You don't have to be built like a football linebacker in order to succeed in wrestling. When entering into a match you will be "divided into age and weight divisions to make sure matches are fair." Each match is timed and divided into three periods, periods that are variable depending on the level. Ways to score points vary with the type of wrestling. Points can be garnered by escaping, takedowns, and reversals. Wrestling has been around for a long time. In fact, "Drawings on cave walls in France show wrestling existed more than 15,000 years ago." You'll briefly learn about the sport in ancient times and swing into its history as a modern, Olympic sport.

In order to be safe as you wrestle on the mat, you'll have to have "headgear, shoes, and singlets." In this book you'll learn what they are and the purpose for using them. Some of the most common techniques used include "takedowns [single- and double-leg], escapes, reversals, and pins." You'll get a chance to take a look at successful wrestlers such as Cael Sanderson, Clarissa Chun, and get a look at the top ten American wrestlers. You'll also learn about the different names for the sport, the levels of amateur wrestling, women in the sport, how hard work and practice can pay off, the need for a high level of physical fitness, you'll get a chance to look at top wrestling moves, and you'll learn about many other interesting facets of the sport.

The layout of this book relays the excitement of the sport with its engaging full-color, high-action photographs. There are numerous informative sidebars scattered throughout the book. For example, we learn about oil wrestling, sumo wrestling, and how the amateur wrestler can become a pro. With this book in hand, the young reader can explore YouTube to make ther Fireman's Carry, Half Nelson, and Grand Amplitude Throw come to life. In the back of the book is an index, a glossary, and additional recommended book and website resources to explore.

Quill says: This is an excellent overview of amateur wrestling for the young person who wants to engage in a little "combat on the mat."