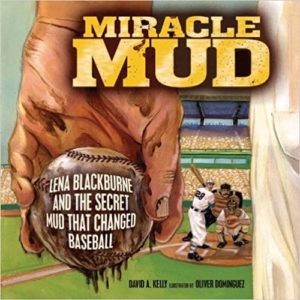 The crowds clustered around the outside of the stadium, anxious to see a great game and some great players. As much as Lena Blackburne “wanted to be a famous baseball player,” it just wasn’t going to happen. Instead, in time, he was going to be famous for something else altogether and that special something was none other than mud. As men climbed up and down a ladder setting the scores on an old-fashioned scoreboard, Lena was out there playing. It didn’t seem to matter what base he played, he wasn’t climbing up the fame ladder by any means. It all began in 1910 as Lena started playing “for lots of baseball teams.” The Hall of Fame just wasn’t calling his name.

After his time was up on the field, Lena began coaching. He rubbed his chin thoughtfully as “an umpire complained to Lena about the baseballs.” New baseballs were just too darned “shiny and slick” to pitch and so players did everything they could do to solve the problem. They soaked them. Too soggy, too messy. Shoe polish wasn’t the answer and “spit and tobacco juice” was kind of disgusting. Lena stared at one of those shiny, slick baseballs trying to think up a solution. When he went home to Jersey he headed out to do a bit of fishing and “stepped into some dark brown mud.” Hmmmmm! Could this gooey stuff be the solution to the baseball dilemma?

This is an intriguing story about Lena Blackburne and his super secret special mud. Of course no one ever heard of Lena Blackburne and his less than memorable Major League Baseball stats in spite of having played 550 games. However, there’s probably not a single player in the league that hasn’t heard of his super secret mud. Lena Blackburne’s “Baseball Rubbing Mud” became famous and did change the face of baseball. The artwork is lively, colorful, and at times a tad humorous as Lena ponders the fate of the baseball. In the back of the book is a two-page spread about dirty baseballs, Lena’s special mud, and the current owners of the business, who contributed their secrets to the book. If you have a youngster who is a baseball fan, this is one interesting book you may wish to add to your list!