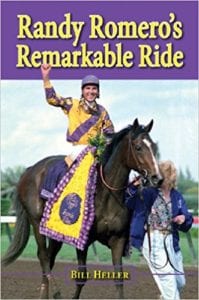 If you enjoy “The Sport of Kings,” then you’ll want to get a copy of the newest racing biography featuring Randy Romero. While it’s a very enjoyable read, you will also gain a deep appreciation for the amazing dedication a successful jockey must have for his profession.

Randy Romero’s Remarkable Ride begins with an overview of Romero’s life, including the incredible ups and downs he experienced on the track. With 4,294 victories, 25 riding titles, bringing to victory (awkward but don’t want to using “racing” again) some amazing Hall of Fame horses and riding in the Kentucky Derby an astonishing nine times, he is recognized as one of the great jockeys of the last 50 years. But Romero also suffered through 12 major injuries and 25 surgeries during his racing career. From a near-fatal fire in a sweatbox explosion to a punctured lung, he endured an incredible array of injuries. But he never allowed his pain to keep him from riding and would repeatedly bounce back from life-threatening injuries, getting back to the track and racing in record time. Notes Angel Cordero, Jr., a fellow jockey, Romero “…had the character of a champion. He went through a lot of accidents and the burn, and he never showed any fear. He just kept coming back.” (pg. 15)

After giving reader a brief overview of Romero’s life, the author writes about the jockey’s childhood. With an abusive father, who verbally and physically mistreated all his children as well as his wife, life at home was hell for Romero. His escape was through horses. He learned early that he had a natural talent (and flair for getting hurt). The fledgling jockey’s very first ride at the age of six ended in a runaway Paint mare with a scar that is still visible. But he got right back on the unruly horse later the same day.

Randy Romero’s Remarkable Ride follows the jockey’s career from his early days riding match races on small Louisiana tracks to riding at such esteemed tracks as Keeneland and Belmont Park, through Romero’s retirement, resurgence as a ‘jockey agent’ and current health struggles. The reader is given an insider’s view of the racing world and gains insight into what it takes to successfully ride horse after horse across the finish line first. I particularly enjoyed the in-depth coverage of two Hall of Fame fillies, Go For Wand and Personal Ensign, both of whom were ridden by Romero. There was also a fair amount of humor to the story, with little anecdotes spread throughout that showed the camaraderie around the barns (racing and losing to a chicken was the best!).

It is obvious that the author had the full cooperation of Randy Romero and his family for this book as they are all quoted extensively. And they didn’t hold back as, for example, Romero talks candidly about his brief experimentation with drugs, his divorce, and his many injuries. The book was a quick read and gave me a new appreciation for jockeys.

Quill says: If you’re a racing fan, grab a copy of Randy Romero’s Remarkable Ride and start reading – you’re in for a great ride.