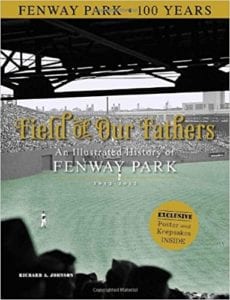 Who doesn’t love Fenway Park? That’s the question Richard Johnson asks in the introduction to his new book Field of Our Fathers and with the exception of perhaps the Yankees, I’d have to agree. Who doesn’t love Fenway? And who hasn’t seen numerous books that feature the Boston Red Sox and their beloved park? So the author had his work cut out for him on this project – to write/research a unique book that showcases not just the park, but the unique history of America’s favorite (yes, I’m biased) park. I’d have to say, after reading this book, the author has achieved his goal – in spades!

Using a combination of newspaper clippings, essays, quotes, and several reproduced inserts that can be removed and enjoyed (ticket stubs from years past, a newspaper cover, postcards), the author captures the magic that is, and was, Fenway Park. We’re taken on a ride that starts in 1911 when a location for the park was chosen, "eight acres of this centrally located but soggy land" (pg. 1) through 100 years of history, culminating in 2010.

Looking through this book, it quickly becomes apparent that Fenway Park have been so much more than just a major league ball park. The full gamut of sports has been played at Fenway, from football to lacrosse, boxing and soccer, with both high school and college level teams participating. Hockey, anyone? BC vs. BU (that’s Boston College and Boston University for those not versed in Boston lingo), THE college rivals of Massachusetts, brought their rivalry to the park in 2010 and college hockey games continue to be played at Fenway every year. Mick Jagger in concert? Absolutely! The Rolling Stones are just one of numerous groups who have played to sold out crowds in Fenway.

The photos the author has collected for this book are wonderful and kept me browsing on and off for several days. John Philip Sousa leading his Navy Band, the pictures of Yastrzemski (any pictures of Yaz are appreciated!), and the old, 1920s photos of various games and events held at the park stood out. Of course, no book about Fenway would be complete without lots and lots of facts and little known tidbits about the park and this one has them in abundance. You’ll be reading and re-reading this book throughout 2012. If you don’t have a nice place to display this book, then go out and buy a coffee table because Field of Our Fathers deserves it’s very own spot in your living room!

Quill say: Celebrate the 100th anniversary of Fenway Park in 2012 in grand style with this book! Go Sox!