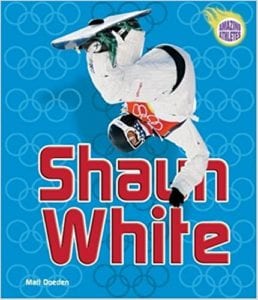 When Shaun White was born in 1986, no one would ever think he would become a world famous athlete because he was a sickly baby in need of heart surgery. Tetralogy of Fallot is a “heart problem that affects the supply of oxygen in the blood” and he needed heart surgery when he was an infant. He soon turned into a very active little boy who loved to participate in all kinds of sports, including skateboarding. Shaun was into skiing, along with the rest of his family, and when he saw snowboarders at Bear Mountain in his native California he was hooked. The only problem was that he was only six-years-old and the resort wouldn’t consider giving him lessons until he was twelve. No sweat . . . his father, Roger, took the lessons and in turn taught Shaun.

Of course his mother was not happy with the idea and said he could only ride fakie. Shaun had found his sport and by the time he was seven he started to win championships. If you watched him in the 2010 Winter Olympic Games in Vancouver, you saw some hot moves. He was catching some big air and stunned the world by landing his final trick, the Double McTwist 2060. According to Peetu Piiroinen, who placed second, “It’s impossible to beat Shaun unless he falls.” Shaun was a “snowboarding natural” when he was a youngster and, as amazing as it seems, appears to get better every year. In this book you will learn about his childhood, the competitions and titles he took, his “career” in skateboarding (he was a two-sport star), when he turned pro, his X Games medals, and you’ll learn many other interesting facts about one of the best extreme sports athletes out there!

This fantastic book about Shaun White, a “high-flying” extreme athlete, will thrill the young reader. The newly revised edition is up to date and includes his 2010 successes and even includes a picture of him as he appears on “The Tonight Show” with Jay Leno. The layout of the book is very appealing with numerous full color photographs and informative sidebars. For example, in one sidebar we learn about how Shaun and his brother designed a room at Target House at St. Jude Children’s Research Hospital. In the back of the book is an index, a glossary, selected career highlights, and additional recommended book and websites to explore.

Quill says: If you have a youngster in your house who is a fan of White’s or loves extreme sports, this is one hot book you should take a look at!