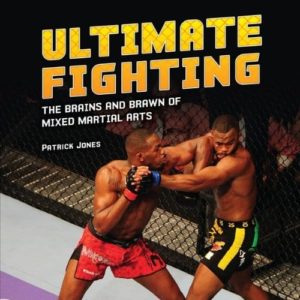 Undoubtedly if you’re into Mixed Martial Arts (MMA) you’re very familiar with the Octagon and what goes on inside it. Decades ago it would have only been left up to the imagination to guess who would come out on top if say a “boxer and a wrestler stepped into the ring together.” Boxing had diminished in popularity by the 1990s and wrestling was more show business than a combat sport. Perhaps if fighters of the various martial arts came together in a ring, people would once again become enthused about combat sports. You’ll get to check out many of the earlier fighters, but one stand out who “kick-started” MMA competition was Brazilian Helio Gracie.

Gracie’s skills came down from Minsuyo Maeda and his older brother, Carlos, but ultimately his style was his own and he challenged all comers to fight him (and lose). Brazilian jiu-jitsu was born and Gracie passed down to his own son, Rorion, who “revived the Gracie challenge by inviting fighters from all martial arts to battle him.” The start of MMA challenges was slow with a few setup promotional matches that were fun to watch, but little else. When the Ultimate Fighting Championship (UFC) began, that Octagon would start to see a lot of blood because it was the home of “no rules.”

The sport included “sumo wrestlers, kickboxers, and college wrestlers” right along with mixed martial arts fighters, including Brazilian jiu-jitsu experts such as Royce Gracie. When “36 states banned the sport” due to the violence and lack of rules, a number of changes had to occur. The rules were revamped and MMA emerged as a “real” sport that people recognized as such. Even though “fights remained showdowns between competing strategies,” many “fighters cross-trained” to gain an edge. Unlike the wrestling matches that were fake, these MMA matches were the real McCoy and people became excited about the sport. In this book you’ll be able to read about the history of the sport, meet the best fighters, check out the classic fights, read about eye-opening memorable moments, and learn where the sport is heading.

This is a fascinating look at the sport of mixed martial arts fighting young readers will love. Young fight fans will enjoy a close-up look at a sport that has gained in popularity over the past couple of decades. The layout of the book is peppered with full-color photographs (many action-packed) of some of the best fighters the sport has to offer. There are numerous informative sidebars that add additional information to the text. For example, we learn about the Unified Rules of Mixed Martial Arts and the weight class. The book definitely picks up in the second chapter when young readers will be riveted to the pages when they learn all about the rules, the holds and how the fight endings are determined. In the back of the book is an index, a glossary, source notes, and additional recommended book and website resources to explore.

Quill says: Young wannabe mixed martial arts fighters will be thrilled to read about the sport and the MMA fighters!