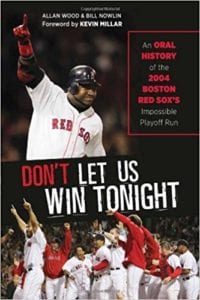 Has it been ten years already? Ten years since the Boston Red Sox snatched victory from the New York Yankees, maneuvered an impossible come-from-behind victory from their arch rivals, and went on to win their first World Championship in 86 years? Amazingly, those ten years have flown by and now, on the tenth anniversary of that amazing victory, Allan Wood and Bill Nowlin have put together a minute-by-minute playback of a Red Sox win that diehard fans had waited far too long to see.

After a brief overview of the prior season’s disappointing American League pennant performance, the authors take a look at the post-season changes; players (on and off the field) that stayed, left, and the new blood that was brought in. A quick look at the 2004 season follows, and then, the meat of the book – game by game – the American League games, followed by the World Series games, with a few chapters thrown in to cover “Travel Day” and “Advance Scouting.” The last chapter is perhaps the most important for those living in ‘Red Sox Nation,’ “Celebration.” (Really, shouldn’t there be an exclamation point after that?) Finally, at the very end of the book, there is an appendix and a long list of endnotes.

Why are there so many endnotes? The reason is simple and is why this book is so good. Rather than simply write a dry synopsis of each game, the authors chose to incorporate a vast quantity of quotes by those who were there; the players, coaches, front office, the medical staff, and members of both the Yankees and the Cardinals. A few paragraphs of text, then it’s on to the comments from those who lived each moment.

There is no doubt that the authors, Allan Wood and Bill Nowlin, really ‘know their Sox’ and it shows in their meticulous attention to every aspect of each game. I learned quite a few things while reading Don’t Let Us Win Tonight (including why Kevin Millar said that), but the quotes from the players are what really drew me in. I could feel the excitement, tension, and relief of each game through their words. Talking about the ALC series game 4, Dave Roberts admits, “I was scared and excited. I can’t tell you how many emotions went through me. To be honest, the fear of being the goat definitely went through my mind because I hadn’t played in 10 days and didn’t feel fresh.” (pg. 127) Comments from both Curt Schilling and his doctor give us an inside look at his famous, truly red sock, and the surgery that kept him pitching in game 2 of the World Series. There’s even a little comedy thrown in by players such as Johnny Damon (talking about game 4 of the World Series), “A lot of people in Boston are talking about how they can die happy if we win. Hopefully, we [can] make their dream come true. But hopefully, they don’t follow through on their promise. There could be a lot of busy ambulances tomorrow.” (pgs. 259-260) David Ortiz, whether intentional or not, added to the comedy with this comment about the parade, “When we drove off the road and pulled into the Charles River, I looked at everybody and I was like, “How is this thing going to float, dude?” Everybody laughed. But it was really cold outside and I don’t really like the water, so I put on a life vest. Everybody cracked up.” (pg. 276).

I don’t usually include so many quotes in a review, but truly, the quotes are what make this book so perfect. The reader comes away with a true sense of the strategies behind various decisions, what the players were thinking, play by play, the tension, stress, anxiety, and best of all, the relief and elation. Don’t Let Us Win Tonight should be added to every Sox fan’s library!

Quill says: If you’re part of Red Sox Nation, or simply a fan of great baseball stories, check out this book and relive the magical 2004 World Championship win for the Boston Red Sox.