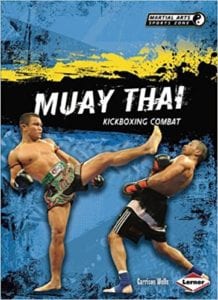 Many young people are into martial arts such as karate, judo, and tae kwon do, but not as many are familiar with Muay Thai, sometimes known as kickboxing. Muay Thai is a sport that originated in Thailand more than 500 years ago and is interwoven with Buddhism, one of the country's religions. The power of the sport has been demonstrated by Melchor Menor, a Muay Thai champion. When he attempted to show how powerful a low kick was "he splintered a baseball bat with a low kick rated at 1,000 pounds (454 kilograms) of force." It was an amazing show of the sheer power and strength of a single kick! Muay Thai, a "stand-up form of self-defense," is becoming better known as more martial arts fighters are using it in mixed martial arts (MMA) matches. It's a hot sport, one that many people are becoming more interested in learning.

Initially, Muay Thai was a wartime weapon in which men would fight in hand-to-hand combat. It was a "martial art [that] split into two forms," krabi krabong and Muay Thai. Thai kings loved the sport and practiced it themselves. Naturally, they invited the best practitioners of the sport into their place to "teach nobles and the royal family." Originally, it was a "brutal sport," but evolved into one with rules and protective gear. You'll read about how each village had their champions, how popular the sport became, and how other nations became interested in it. It even became popular enough to be featured in several movies, movies you hay have seen.

Now that many MMA matches have fighters who work with Muay Thai, you may have noticed it more and become interested in the sport. In Thailand "children start Muay Thai training as early as five or six years old." A fighter is called "nak muay Thai" or "Thai boxer" and the teacher is the "kru." You'll learn about safety measures and protective gear, how fighters train, and the moves they make. Believe it or not, one of the world's largets tournaments is called the "Battle in the Desert" and is held in the United States. You'll also learn about women who fight, the stars in the sport, the benefits of engaging in the sport, you'll lean about several moves (elbow strike, front kick, side clinch, roundhouse kick), how popular Muay Thai is becoming, how ancient fighters trained, and you'll learn many interesting things about this amazing martial arts sport.

The powerful nature of this sport comes alive in the colorful pages of this book. Action-packed photographs swirl though the pages showing men and women who are the epitome of physical fitness as they engage in Muay Thai matches. There are numerous informative sidebars (large and small) throughout the book. For example, we learn about the dimensions of the Muay Thai ring and how the fighters "sometimes perform a dance called 'wai khru ram' or 'ram 'muay'" before a match. In the back of the book is an index, a glossary, and additional recommended book and website resources to explore. Are there belts awarded for attaining certain levels in the sport? You'll just have to read the book to find out!

Quill says: This is an excellent overview of Muay Thai, a martial arts sport that is a challenging way to become fit.