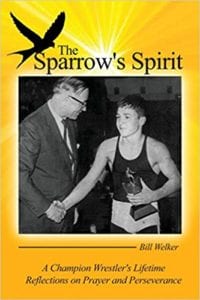 Although some groups will state that this world is all about technology in 2017, there is one other industry that continues – even after all this time – to grow and evolve no matter what new “rules,” ideas or fads come to life. It is also the one industry where people with extreme talents pull down major paychecks to do their jobs: the wide world of sports. Arguably, when it comes to publishing, the genre of memoir has grown and evolved over time, as well, with more and more people being able to put their life stories down in print. This is one author who has found a way to correlate both, offering a truly invigorating, heartfelt and memorable book that stems from the sport of wrestling.

For those who love and crave the excitement that comes from wrestling, the name Bill Welker is synonymous with the sport. Beginning in grade school, Bill Welker had a love affair with this particular competitive world. He states he was a conservative wrestler – one who went on to leave a life-time career on the mats and head in the direction of teaching. Welker is a member of four wrestling hall of fames, and even published the national bestseller, The Wrestling Drill Book, among hundreds of other articles on the sport since the mid-1970’s.

What Bill brings to readers, however, is not just for the sports-minded. This memoir leads readers through a “boy’s” life at first, telling people about some perhaps bad decisions made by him and his brother at a young age. There are stories about that principal many met up with in school and had a run-in with. And there are stories about a boy’s will, and the set-in of self-doubt that comes from taking the wrong path and pulling yourself up (in this case) “off the mat” by your bootstraps.

Wrestling was a Welker Family Legacy, so to speak. Harold, Bill’s cousin, won states; brother, Floyd Robert Welker, was also a champion and Bill’s idol, who saw him as a “gallant gladiator on a glistening mat.” Life, however, does get in the way sometimes (well, let’s face it, all the time), and when Bill lost his will to wrestle – a sport he literally coveted – it caused choices to be made that removed Bill from the wrestling team altogether in college.

Open, honest – that’s rare, in this age of memoirs, but Dr. Bill Welker is highly capable of supplying just that. He speaks candidly about his OCD, dealing with depression, and the ultimate pain of not wanting to go back home to a small coal region in Pennsylvania where he felt he would have to face failure. This is a man who worked. He learned. He wrote. He also became one of the country’s foremost authorities on Folkstyle wrestling. In other words, he took a journey through life that began with sports and ended with something even better.

For those adults out there who are doing the same, or trying to – as well as the people who want to be that “star” and will do anything and work harder than anyone to make it on the mat, gridiron, etc. – then Dr. Bill Welker’s words are the ones to read!

Quill says: Reaching your goals is one thing. Evolving in life to set new goals is more than difficult. But whichever one it is for you, giving up is wrong. With this book: Lesson learned.

For more information on The Sparrow’s Spirit: A Champion Wrestler’s Lifetime Reflections on Prayer and Perseverance, please visit www.wvmat.com