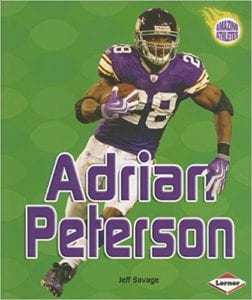 Adrian Peterson looks like one of the toughest players in the NFL, and many people just might say he IS the toughest, especially if they saw the Minnesota Vikings go up against the Cleveland Browns during the season opener in 2009. He was pumping so hard during the game that by the time half time rolled around, he was in need of medical attention. The Vikings’ star running back was “suffering from the heat and from running so hard,” the team doc was pumping fluids in one arm while the trainer was trying to stop the flow of blood on the other. Adrian was some tough cookie. Amazingly he went on to finish the game. Brett Favre was stunned and claimed, “I have never played with a running back like that.” And he probably never will again.

Born to an athletic family, Adrian Lewis Peterson’s father dubbed him AD, which stood for All Day. He was like the Energizer Bunny and just wouldn’t stop. He was up and running “all day.” His beloved brother Brian was mowed down by a drunk driver and his “death crushed Brian.” With this horrifying loss in his life he was more determined than ever to fill the void left in his life by Brian’s death and the subsequent imprisonment of his father for drug-related charges. It seemed like misfortune was following Adrian, but he persevered. In high school his “blazing speed as a running back” began to wow everyone who saw him run. In this book you will learn about how colleges began to notice him, why he chose to play with the Sooners, you’ll learn about the injuries that plagued him, why the NFL was hesitant to sign him in the first draft, you’ll grieve with him at the tragic murder of his half-brother Chris Paris, and much more!

This is the story of a hot young player who should have been named, Adrian “TEAM PLAYER” Peterson. From the first page to the last, this book spells action. The book is peppered with full color photographs, most of them action oriented. Scattered sidebars and captions add a lot of information to the book. The seasoned young football fan will know the meaning of words such as “playoff,” but for those who don’t these words, highlighted in bold purple in the text, are explained in the glossary. I liked the easy, highly readable flow of this book, a book that will thrill any budding football fan. In the back of the book is a section on “Selected Career Highlights,” an index, the glossary, and additional recommended book and website resources to explore.

Quill says: If you want to read about one of the NFL's hottest new stars who says, "I want people to remember me as the best player to ever play the game," this is a marvelously animated book for the young football fan!