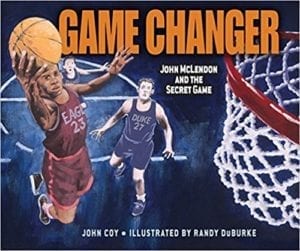 Two cars quickly filled with young white men, “a group of basketball players who thought they were the best in the state of North Carolina.” No doubt they were among the best, but they were clueless as to the style and presence of their opponents until they later hit the basketball court. The game would be secret and even the players themselves didn’t know who they would play. It was a secret that would be kept for decades, one that these young players would always remember. Members of the Duke University Medical School team were prepped to play, but just who were their opponents?

As they were driven through the seedy back streets of Durham, “they covered the windows with quilts so they wouldn’t be seen.” When they exited the cars they “pulled their coats over they heads and walked through the women’s locker room into a gymnasium.” Their faces were tentative and for good reason. In 1944 the consequences for “race mixing” were serious, so serious that anyone caught doing it could be put to death. Before them stood five of the Eagles, from the North Carolina College of Negroes and their coach, John McLendon.

Segregation had kept them apart because the Eagles “were prohibited from playing against white teams,” but today prohibition would be set aside...there would be a game. They looked at one another and only saw one thing and that was a basketball game. The game began slowly, clumsily for some of them had “never been this close to a person of a different color” and they “were hesitant to touch or bump into one another.” It wasn’t long before they forgot about color and began to make their moves, erupting into a flurry of activity on the court. Just what would happen on that court that would change the course of history?

This is the amazing story of a “secret game” of basketball that young readers will love. The tale is about a little-known game that proved that race doesn’t really matter when it comes to sports. What really mattered was all of the young men loved the game and could learn about each other on the court. I loved the pacing of the tale, the build-up of tension that walked me right onto that court as the members of the Duke University Medical School team and the North Carolina College of Negroes Eagles sized one another up. It would almost seem unimaginable to young people today that there was such extreme racism. It’s through books such as this one they will learn. The artwork is muted, executed in such a subtle manner that it gives it a retro feel.

Quill says: An amazing work that is a Junior Literary Guild Selection.