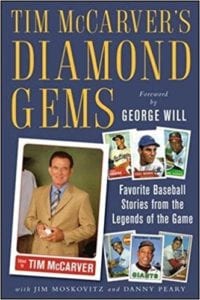 Anyone who is a baseball fan has probably already heard of Red Sox’s Don Nava and his amazing grand slam homer. It was his first time up to bat in the majors, very first ball no less, and it instantly made all his dreams come true. It’s also the stuff legends are forged from. Tim McCarver, who has interviewed many legendary baseball players has culled some of the best ones, in this book. There are the bloopers, the scandals, the homers, record breakers, and anecdotes galore. As a young baseball fan, I never thought I'd live to learn that Mike Schmit, third baseman, Phillies admitted to being infallible. “It’s unfortunate that when I was young, I was so sensitive to let the booing of the Philadelphia fans hurt me and affect how I played. At times, it made me play too hard and try too much.” (pg.73) My sincerest apologies heading Mike’s way for all the things I thought about him.

This book starts off first with gems from many managers, whose candid take on the game and at times, somewhat nostalgic views get the old wheels turning. As Bobby Valentine claims, “...I like the whole gig. I like the preparation, I like watching the players perform and being with them as they do it, and I like being with the press and fans when it’s over.” (pg. 29) That is simply “managing in a nutshell.” We whirl around the field looking in the nooks and crannies of baseball player’s lives as they peruse their memories for the winners. Some, I must say, were on the somewhat embarrassing side. Take for instance when Bob Uecker made the costly mistake of picking up a Dixieland musician’s tuba and decided to play catch with it. Talk about a dent in a guy’s reputation and a hole in his pocket.

Naturally, when any career move is made there is usually a bit of parental comment. Yogi Berra, the least talented ball player in the family, asked his dad if he could play professionally when he got the opportunity. The curt reply was, “Nothing doing. You have to work.” (pg. 35) The rest of that story is a classic gem the reader will find quite amusing. When Carlos Delgado told his dad he’d rather play volleyball, the logical response was, “How many Puerto Ricans do you see playing professional volleyball?” (pg. 63) He had a point there. Memories and trivia speckle the pages of this book. Let’s see if you have a crackerjack baseball memory. Who was the player who would do a flip on Fan Appreciation Day? Why did they lower the mound? Do you know how you can cheat when you’re on first base? Who had a sister who was a better ballplayer than he was?

If you love baseball, you’re going to love this book. I must admit there were a few times I blinked my eyes with amazement with some of the admissions, the “Hey, I’d never say that!” type of gems. This book was a fun learning experience. Some of the golden moments of baseball are recorded in these pages and it is easy to see why a player would celebrate or curse an unusual event. Take for instance, when Tom Seaver stepped on the mound after sitting on the disabled list for a month and threw a no-hitter. He may have cursed a bit when he began to feel the pain of his injury, but finished up and had something to celebrate the rest of his life. Gems . . . all of these vignettes were fun to read and at times the memories came back and I almost could hear the crowds cheering, or jeering as the case may be (sorry again, Mike). If you love baseball, there is no way you’re going to want to pass up this book!

Quill says: This is the perfect book to take down memory lane. Get out your peanuts, popcorn, or Cracker Jacks and get ready to read!