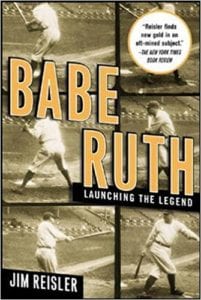 Harry Frazee may have been a baseball baron, but he poured his heart and soul into Broadway productions. No one really ever solved the mystery of why he needed cash in 1919, but his name went down in history as the man who sold Babe Ruth to the Yankees. Frazee, an all but forgotten man by the masses, probably made the worst deal in the history of baseball. Ruth, who went on to become an American icon, only left one thing behind with the Red Sox . . . the “Curse of the Bambino,” an epithet frequently discussed on street corners, in books, and magazine articles. Everyone had their opinion about the curse, many with mixed reactions, but one thing they did know was that “it was Ruth who would have the last laugh.” (pg. 13) Mr. Frazee should have stuck with the Babe and baseball and left Broadway to New York.

Babe’s start with the Yankees was a bit lackluster, but soon he settled in and began to make his mark. The time was right for a great American hero to be made and he was going to step right up to the plate and prove his mettle. He could hit the ball out of the park with ease, he made for great “copy” with all the sportswriters, and was known for his generosity with children. No one really cared that he ate like a pig, flaunted authority and was “brash, vulgar, loud, and completely uninhibited.” (pg. 21) Babe Ruth was a man who could do no wrong and he began to chalk up the stats to prove it. People began to jam the seats of the Polo Grounds just to get a glimpse of this phenomenon. Later they began to take their sons and grandsons so when they were wizened old men they could brag that they saw the home run king.

“Baseball fever” had overtaken the nation and Babe seemed to be the center attraction. In this book we get a close up look at the team that made the man or, if one prefers looking at it in a different manner, the man who made the team. Wally Pipp, Del Pratt, Roger Peckinpaugh, Aaron Ward, Ping Bodie, Duffy Lewis, Muddy Ruel, Bob Meusel, Truck Hannah, and manager Miller Huggins. Of course there was that stable of pitchers, including the infamous Carl May, that “no-good head hunter.” It was a lineup that any “leather-lunged” fan could well appreciate. The Times said that “Ruth cost the Yanks $125,000" and “if he has many days like [this one], he will bring that much into the doctors’ pockets treating laryngitis patients.” (pg. 81) The day in reference caught the Babe homering and hammering the ball in what would soon become par for the course. No one could ever get enough of their hero.

One of the most amazing things about this book was the intense play-by-play recreation of many, many games. It gives the reader a chance to get to know many of the fine players on the Yankees who were overshadowed by Ruth. I came away from the book with a good feel for some of the players, players I had never heard much about. Some like Mays, whom I probably would not have cared for then and now don’t, but others I came to enjoy their game and personalities. A good two thirds of the book is set up in the play-by-play manner with very little off field shenanigans described. The book seemed to relax toward the end and took on a more conversational field, making it more enjoyable to read. This book does not cover much biographical material and people like Brother Mathias were only casually mentioned. This is a “play ball” type of book, the kind that one can almost hear coming out of the speakers of an old Crosley radio. If that is your type of book, this is one of the best!

Quill says: If you want to read about the 1920 Yankees and get an incredible insider’s look at Babe, the team, and a play-by-play look at the season, you’re going to love this book!