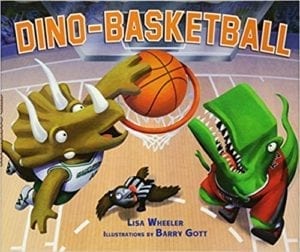 March Madness has begun in earnest and dino basketball fans are heading to Mastadon Square Garden to watch the Grass Clippers mow down Meat. The teams are on the court warming up. Allosaurus takes an outside shot. Swish! Can he do that during the game? The crowd is getting pumped up as the cheerleaders strut their stuff. Hey, ho! Can you just imagine what the the dino fans are shouting? Get up, Get down, Pass that dino ball around! STOMP! STOMP! It’s tip off time and the ref throws the ball up high and the Clippers snag the ball.

“The game begins at breakneck speed.
Two points for Stego! Clippers lead.
Allo answers off the dribble.
Diplo take it up the middle—
T. rex charges from behind.
Steals the ball. It’s Meaty time!
He drives the ball up to the hoop.
Lobs to Raptor—Alley-oop!”

Up and down the court they go. Meat, the underdogs, soon tie up the game. Shots are blocked and whoosh! All of a sudden a Meaty fouls Stego. The whistles blow as Ptero # 1 is ousted from the game. The teams dribble, they zig, they zag, “pivot, jump, release.” Get up, Get down, Pass that dino ball around! STOMP! STOMP! It’s just the beginning of the season and the game is some hot, but who’s going to win?

This story is a great way to learn the difference between the carnivorous dinosaurs (meat-eaters) and the plant-eaters. The center court scoreboard lists the different players for each team and in the text the Grassclippers and Meat players names are highlighted in their team colors. For example, the Raptor, a Meat (carnivore) has his name highlighted in red. Your dino-basketball fan is going to STOMP, STOMP … love this new dino book. Do you know which team the pachycephalosaur plays for? You’ll just have to read this book to find out!

Quill says: This vibrant and highly animated game of dino basketball is an amazingly fantastic read.