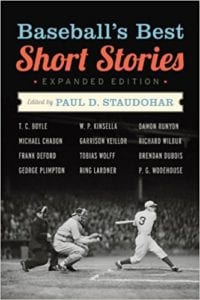 Originally published in 1995, this new, expanded edition of Baseball's Best Short Stories includes eight new short stories for a total of 34 tales centered around America's Favorite Pastime. So popular was the original edition, that is sprouted a series of "Best Short Stories" books from all areas of the sports world. After reading this fun, entertaining book, it will be quite apparent why the series has been so popular to sports fans.

The various stories in Baseball's Best Short Stories, written between 1888 to 2008, were all first published in other publications, from Sports Illustrated to The New Yorker. Authors range from those recognizable by sports aficionados such as George Plimpton to others famous for other writings such as Garrison Keillor and Zane Grey. The editor has done an excellent job of selecting a well-rounded variety of stories to highlight in this book and you'll find everything from inspiring, to funny, to goofy and yes, even sad tales within its pages.

Bullet in the Brain by Tobia Wolff is one of the new stories added to this expanded collection. It's the tale of not baseball, but rather a bank robbery. A very cranky book critic, Anders, is stuck in a long line at the bank when two robbers come in to make their fortune. Anders and one of the robbers come to blows and yes, baseball does seep into the story, in a very tragic, yet beautiful way where one can smell the freshly mowed grass and see the sun slowly setting on several boys playing ball.

One of my favorite stories in this collection was Who's On First by Lloyd Biggle Jr. and no, it's not based on the Abbott and Costello routine. It is a very funny, slightly bizarre tale of Muko Zilo, an escapee from the Juvenile Rehabilitation Center on the planet of Philoy, Raff III, Sector 1311 (at least I think it's a planet!). Zilo is about as wide as he is tall (although he isn't very tall) and he just happens to LOVE baseball and is a pretty good player to boot. Of course, there are also plenty of realistic stories such as Smoke by Michael Chabon about Matt Magee, an aging pitcher who attends the team's catcher's funeral. Attending the funeral causes Magee to re-examine his own life, much of it in the context of baseball. Like Smoke, many of the stories in this anthology trigger a wide range of emotions and will undoubtedly bring back fond memories for the reader.

Quill says: Lots of baseball talk, lots of baseball action - this book is the perfect leisurely read for the baseball fan. As the editor noted in the Preface, "Batter Up!" and enjoy.