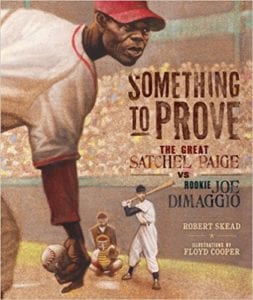 Satchel Paige had no rival in the pitching department, but he wasn’t allowed to play in the major leagues “because of the color of his skin.” There was a “young, skinny prospect named Joe Dimaggio,” who had to be put to the test. The only way to see if he could make it in the majors, thought New York Yankees’s general manager, Ed Barrow, would be to pit him against Paige. It was going to be a challenge and twenty-one-year-old Dimaggio was wondering how he would fare. It was said that the legendary pitcher “threw fire” and the “balls he pitched looked like marbles or bullets.” It was definitely going to be the showdown of 1936 that no one would forget.

Thousands crowded the stadium for the exhibition game, a game that would determine the fate of young Dimaggio. The major leaguers were up against Paige’s infamous pitches. The “trouble ball,” “bat dodger,” and “wobbly ball” sent them back to the dugout. A sudden turnaround saw “a run on the scoreboard” for the major leaguers, but the young squirt had not yet been up to bat. Dimaggio was going to prove his stuff, but a windmill-like pitch that hit him in the shoulder made him winch in pain. No error there and Dimaggio knew that Paige was relaying the message that he shouldn’t “get too cocky in the batter’s box, rookie.”

The game went into the fourth and Satch’s All-Stars tied up the game. Satchel Paige was living up to his name as the pitches kept coming and the major leaguers “were flummoxed by his assortment of baffling pitches.” Young Dimaggio got a piece of his “four day creeper,” but was thrown out before his foot could touch first base. Paige was confident, but he had more experience than the young man who wanted to be a New York Yankee. The pitches that headed his way were “bent so much that they looked like a wiggle in a cyclone.” Would young Joe Dimaggio ever get a hit off the legendary Satchel Paige or would he be heading back home?

This is an amazing tale of the showdown between two greats, Satchel Paige and young Joe Dimaggio. The excitement of the showdown begins even before the players hit the exhibition game when Barrows recruits Paige. Barrows knows that “To see how good he is, he has to face the best.” Paige, who accepts the invitation, has an air of confidence that sets the stage for the story. The artwork has a grainy, dream-like aura that gives it a nostalgic feel, taking us back through time to the memorable showdown. Both the story and the artwork meld to create an exciting baseball tale that young and old will love. In the back of the book is a brief overview of the players’ inductions into the Hall of Fame and the injustices African-American players had to endure.

Quill says: If you have a young baseball fan who is interested in the history of baseball, this is a tale he or she won't want to miss!