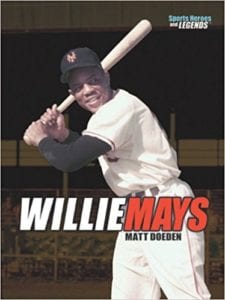 If you simply run your fingers down Willie Mays’ stats in the back of this book, you can only imagine the excitement his fans felt as he played game after game. William Howard Mays Jr. was the first of the superstars, perhaps given the subtle differences in the actual playing field, one of the best ever. He was what you would call a “five-tool player,” a “player [who] excels at all facts of the game.” When he was a young boy growing up in Westfield, Alabama, he was the type of child who was a contender in not only baseball, but also football and basketball. It could be said Willie cut his teeth on baseball because as a babe he learned to walk by chasing a baseball. And he started walking at the age of six months.

His parents separated when he was quite young and family circumstances left him in the care of his father who raised him with the help of two aunts. He wasn’t destined to be an only child because his mother remarried and gave him eleven half-siblings. Baseball was his father’s passion as well and William Sr. played semipro ball, where his son eventually joined him. Willie Jr. lasted one hot night as a dishwasher and decided playing baseball was infinitely more appealing. He was a young man who had what it took to be a major contender in the game, but he had a few things to learn and one of them was that he had to play his own game and quit imitating his idol, Joe DiMaggio. Piper Davis, the manager of the Birmingham Black Barons, said “he had to get over his fascination with DiMaggio and play like Willie Mays.”

Young Willie easily made an impression in the Negro Leagues, but as luck would have it, he was spotted by Eddie Montague. Montague was sent to scout Alonzo Perry, but his eye was soon on a young twenty-year-old whiz kid. In the blink of an eye Willie found himself signed with the New York Giants. He received jersey number twenty-four and was third in the lineup. There were some unexpected obstacles. The “fans were verbally abusive” and he needed to loosen up some. By the end of the year he was the National League Rookie of the Year. In this book you’ll be taking a good look at the man behind the legend. You’ll learn about The Catch, his discouraging military service, family tragedies, his awards, his marriages, how he felt when “his honeymoon with the New York fans” was over, you’ll learn about what happened when the team moved to San Francisco, and you’ll get to take a look at many other fascinating aspects of his career.

Young baseball fans everywhere will love taking a look at sports legend, the great Willie Mays. This very well written and researched portrait focuses more on the baseball career of Willie Mays than his personal life. Although we get a glimpse of what life was like off the ballfield, the facts are brief and are not gone into in great depth. I liked the balance the book made between his personal life and his game. I expected to find a “baseball bio” and was certainly not disappointed. For example I loved reading about things like how he became the “Say Hey Kid,” how he made that infamous catch, how he fine-tuned his swing, how he encountered racism, and other game related vignettes. In the back of the book is an index, a glossary, personal statistics, regular-season statistics, defensive statistics (outfield), postseason offensive statistics, source notes, a bibliography, and additional recommended website resources to explore.

Quill says: If you want to know all about one of baseball's superstars, you'll definitely want to take a look at Willie Mays, one of the best!