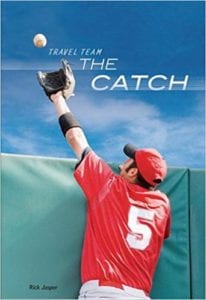 Anyone on the Las Vegas Roadrunners knew what "The Catch" meant and it probably left a sour taste in each and every one of Danny Manuel's teammates' mouths. Hey, it was a rising line drive that should have sunk the Runners and put the Phoenix Desert Eagles into the running for the semi-finals, but Dan the man was there. It was one of those once in a lifetime catches, one that would put the Danny and the Runners on the map, but Coach Harris and his assistant Coach Washington weren't happy. Tough.

Coach Wash had taken him aside after the game and congratulated him, but then said, "You know, it was the wrong play." What the heck was he talking about? It took the wind out of Danny's sails for a minute, but when the video of "The Catch" went viral on YouTube and he became famous that snide remark didn't matter. Danny's Dad was totally psyched and told him that he "must have watched it a dozen times, fast-mo, slow-mo," and that the phone was ringing off the hook with opportunities.

Jack Strauss, a kind of overweight, frumpy sort of guy, had a "business proposition" for him. There was money for Danny and if he was willing to represent Ocelot, a company that sold high-end sports gear, he really could become famous. Danny was just the kind of "elite player" they needed. It wasn't long before he liked that "hero thing" and he soon discovered he "liked it ... a lot." Dan-ee! Dan-ee! He was signing autographs to "Ocelot-clothed kids," but just because he figured he was special didn't mean everyone else did. Could Danny keep making the plays that made him famous? Would his ego defeat him in the end?

This is the story of Danny, a guy that made the catch, a catch that will entrance young baseball fans. Although listed for ages 9 to 12, confident and reluctant readers will also enjoy this short, high interest baseball story. It uses a lot of baseball jargon and doesn't dumb down the reader with a lot of fluff. For example, when the pitcher Shotaro is up against Beast Bronsky, he faced a guy who "just wouldn't go out." There is a lot of play-by-play action, but also a serious message about team playing, something that Danny simply doesn't want to listen to, not even from his sister, Mel. "You're talking like you are the team."

Quill says: This is a thought-provoking baseball tale, but a good one that young fans and players will like.