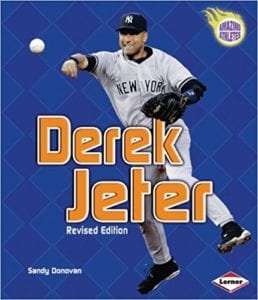 Most boys from Kalamazoo, Michigan might be inclined to be Detroit Tigers fan, but not Derek Jeter. He was a die hard Yankees fan because when he was small he lived in New Jersey, where his “whole family—parents, grandparents, aunts, uncles, and cousins—were Yankees fans.” He took his love for the team halfway across the country and never lost sight of his dream to become a member of the team. The other kids in Kalamazoo must have thought it was kind of weird when he “wore his blue Yankees jacket every day.” When he visited his grandparents he was able to go to games and he wanted to play shortstop for the team. It was a lofty goal, but his family was supportive and “would play ball with him for hours.”

Once Derek got into high school he was a seasoned player and “during his last two seasons, he hit better than .500.” He was undoubtedly one of the best players in the country and baseball scouts started to show up at his games. He was “named the 1992 Player of the Year by the American Baseball Coaches Association,” and undoubtedly he was going to be drafted. The Cincinnati Reds were slated to have first pick and amazingly they bypassed Derek. A “surprise phone call” set Derek’s dream in motion … he had been drafted by the Yankees! In this book you’ll learn about his stint in the minors, his struggles trying to hone his game, his intensive drive to practice hard enough to move up to the majors, his successes when he finally moved up, his charitable activities, you’ll meet his family, and learn many other fascinating things about Derek Jeter, an amazing athlete.

This book starts off quickly with an animated overview of the 2009 World Series and Derek’s part in helping the Yankees win the title. The young baseball or Yankees fans will love the flow of the story and will be able to see how dreams really do come true. The numerous photographs are well chosen and there are many action oriented ones. I enjoyed “meeting” his family and liked the shot of Derek as a young player in high school. There are several informative sidebars scattered throughout the book, including one that lists some of the Yankees’ greats. In the back of the book is an index, a glossary, selected career highlights, and additional recommended book and website resources to explore.

Quill says: This is an exciting look at Derek Jeter, a Yankee legend and one of baseball’s best.