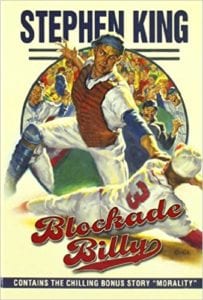 "There was something strange about him, something off, something that made folks nervous..." William "Blockade Billy" Blakely was a last minute replacement for not one, but two catchers who met with accidents right before the baseball season opened. There was no expectation that he'd do well, but the New Jersey Titans needed a catcher and were desperate. So up from the minors came Blakely, and while he was a little "off," he could stop a ball, and an opponent, like no other.

The story opens with an old man in a nursing home telling Stephen King the story of Blockade Billy. We soon learn that the old man is George Granny Grantham, the long since retired third-base coach of the Titans. Billy, he recalls, was called up from the farm team and it was soon apparent that he was a young man of few words. But that didn't matter once his talents were exposed. Billy was a strong hitter and nobody got past him trying to slide into home plate. The fans loved him, holding up signs such as "Road Closed" and "Bloh-KADE!" Okay, so he talked to himself and often spoke of Billy in the third person. Quirky? Yup, but he was an invaluable member of the team so who cared?

Since this is a Stephen King short story, we know that there is more to Billy that initially meets the eye. And at just 80 short pages, it doesn't take long to discover what the mystery is. While a fun story, it certainly doesn't rank among the creepiest of King's. The language is also a bit "spicy," and because it revolves tightly around baseball, will likely appeal primarily to baseball fans. Still, if you are a Stephen King fan, I'd recommend adding this one to your collection.

This edition of Blockade Billy contains a second short story, Morality. In this tale, we meet Chad and Nora, a seemingly happy couple. Chad works as a substitute teacher while working on his novel, and Nora works as a visiting nurse, caring for an elderly, retired minister, Winnie, who is recovering from a stroke. Money is tight, so when Winnie proposes a deal in which Nora will have to do something illegal but unlikely to land her in jail, in exchange for $200,000, she and Chad must make a big decision. Of course there'd be no story if they passed on the offer, the question is, what will happen once Nora "does the dead"? The tale doesn't hold any real surprises, but does bring home the fact that money doesn't buy happiness.

Quill says: Typical quirky King, Blockade Billy certainly won't rank as one of King's best short stories, but it is a satisfying read for a Saturday afternoon.