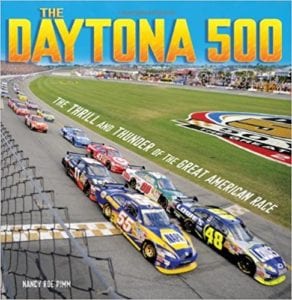 On February 22, 1959, more than 100,000 NASCAR fans would anxiously peer out over the Daytona tri-oval awaiting the start of the first Daytona 500 race. Mario Andretti later quipped, “You can’t call your career complete unless you put a Daytona win under your belt.” Perhaps for many fans, they can’t say they’ve really experienced racing until they’ve actually made a pilgrimage to Daytona to sit in the stands and watch this “500-mile explosion” in person. The roar and excitement doesn’t only come from the stock car engines, it comes from an excited, appreciative audience. The Daytona 500 is the “Super Bowl of the National Association for Stock Car Auto Racing (NASCAR) circuit,” a race that owes its origin to racers on the sands of the Daytona and Ormond beaches.

It all began with a challenge when Ransom Olds and Alex Winter decided to pit their cars against each other on the beach at Ormond, Florida. The “Pirate” and the “Bullet” may not have come close to hitting the high speeds of cars that would come later, but they were legendary in that they set the stage for generations of racers to come. You’ll be able to follow many trailblazers as they raced their cars on the beaches until you meet up with “Big Bill” France, a visionary who would attempt to give some structure to the sport. France “wanted to start an organization to govern stock car racing.” By the end of 1947 his dream came true when the organization was formed and rules were agreed upon by the consensus of “35 drivers, mechanics, and businesspeople at the Streamline Hotel in Daytona Beach.” NASCAR would soon be up and running.

It will almost feel like you’re right in the stands watching as you read some interesting vignettes of the sport and hear the crowds go wild as exciting historical stories are recapped. You’ll read about the Daytona 500 wild ‘n crazy first race, DeWayne “Tiny” Lund’s heroism and Cinderella-like chance at winning a race, how Mario Andretti “thrilled the fans and unnerved the other drivers” with his antics on the track, Richard Petty and David Pearson’s extreme rivalry, and how “trading paint” ended up in a real time fight between the Allison brothers and Cale Yarborough.

After the “wild 1979 finish,” which you’ll read about in this book, “NASCAR became a truly national sport,” one that can now boast millions of fans of all ages and walks of life. As the stakes became higher, the drivers began to push their cars to incredible speeds, but soon NASCAR realized the unsafe conditions and implemented restrictor plates that would reduce “horsepower—and speed.” In the more recent history of the sport the stories seemed to become more electrifying. You’ll read about the Allison family duel in the 1988 Daytona 500, how Wessa Miller rubbed a lucky penny so Dale Earnhardt would win, Michael Waltrip’s triumphant win that turned into a tragedy, and how one jobless racer came from behind to win. If all the amazing stories aren’t enough you’re going to learn about the evolution of the stock car, you’ll get to check out the specs of the stock car, and finally get to read about the Thrill and Thunder of the Great American Race!

The young reader will get a real taste of the “Thrill and Thunder” of the Daytona 500 in the pages of this book. I’ve read several books about individual racers and the NASCAR circuit, but this is one of the most interesting by far. The marvelous assortment of stories in this book was what interested me the most as I read about the most obscure figures right along with the more commonly known racers in the sport. I found the overview early history of stock car racing jumpstarted this book very nicely and kept my interest until the last pages. The funky real life characters of Henry Seagrave (Mad Major) and Sir Malcolm Campbell were quite interesting to say the least. The book was very well written and researched and many interviews were conducted in person. There are numerous informative sidebars and ~HOT~ photographs. In the back of the book is an index, a glossary (including slang), and interview with John Andretti, an explanation of the meaning of NASCAR flags, source notes, and additional recommended book and website resources to explore. This is a Junior Library Guild Selection.

Quill says: If you want to read about the ~HOT~ and fascinating history of the Daytona 500, this is one book you'll find hard to pass up!