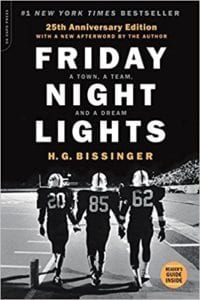 H.G. Bissenger’s book Friday Night Lights is a non-fiction account of a football team in Odessa, Texas spanning the decade of the 1980s. A once financially successful town dependent on oil revenues, Odessa's fate makes an about turn as profits dwindle, families face bankruptcy, and the crime rate climbs, far exceeding the national average. Enter the Permain Panthers football team, a group that seems to be defying all odds, proving that determination and grit can bring hope and success to this small town. It goes without saying that just as surely the team can also bring the town to its knees if it fails to win the State Championship.

At an early age, children are indoctrinated into the faith known as the Permian High School Panthers Football Team, a religion that is followed just as fervently as any other. Boys pray that they will rise to the challenge and become the next star of the Pantheon Panthers, while girls dream of becoming a “Pipette,“ a glorified indentured servant whose sole obligation is to meet the needs of an adoring, or as the case may sometimes be, un-adoring, football player. When they shine, the players are treated much like Greek gods, but like those gods, their reign is brief, landing some in their own version of Hades.

Bissenger follows several players, and their coach, as they travel on a journey to the State Finals. Along the way, the star player, Boobie, sustains a knee injury and learns the hard way that not only is he expendable, but that all privileges once extended to him are no longer afforded. This is made abundantly clear when the once promising star realizes that he is now actually required to attend class to receive a passing grade. While some players do show academic promise, most are unprepared for the rigors ahead of them in the real world. These players live in an eery twilight zone, reinforced by adults obsessed with winning the next Friday night's game. Along with portraits of the players, Bissenger offers a sympathetic portrayal of the coach who tries to create a winning team against the backdrop of adolescent angst, and families struggling to stay intact against a rising tide of economic and emotional woes.

Bissenger doesn't focus his reporting solely within the boundaries of the football field, he also examines how football dominance intersects all other aspects of town governance. Bissenger explains how Permian High School, once the bastion of white middle and upper-middle-class families, gerrymanders town lines so that it can pick and choose its star athletes from less privileged areas. He also reports on how funding is disproportionately spent on the football team; making scholastic achievement a secondary function of the school system. Bissenger takes us to a court proceeding where a judge is asked to rule on whether a star athlete with a questionable passing grade in algebra is qualified to play in the next game. By the time you reach this point in the book, you will fully understand that in Odessa, a town where winning a game is everything, judgment will always favor the athlete. Whether the Panthers succeed in becoming champions or not, in the end, the season is over, the old players move on, and new players replace the old, and for a brief moment, they too are stars.

Quill says: A tale of the American Dream gone awry.   A fantastic book.