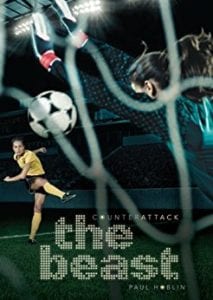 Alyssa Duncan found a way to be someone when she was out there on the soccer field doing her thing as a keeper for the Fraser High Copperheads. Getting her team members revved up and motivated was her thing. So was Rick Morris, an "all-state soccer stud and all-around eye candy." They were both goalies and to him she was "both a babe and a beast at the same time." Alyssa knew she was hot, knew she was the beast, and later she knew she was in big time trouble. She was protecting the goal, doing her thing, when all of a sudden she saw a knee heading to her face and then nothing.

Everything was a blur and when she came to, Vicki Emmer, the athletic trainer, and Coach Berg were hovering over her. Berg was still anxious to finish the game, even after he claimed, "You had your bell rung, Duncan." Yeah, something was definitely wrong and Alyssa was experiencing extreme bouts of wooziness. It would be the end of the game and, in retrospect, getting kneed to the head would be a game changer. Ruth Middleton offered to take her to the hospital where they'd hand out a diagnosis that would put a halt to her career as a beast ... least ways in the short term.

Erin Hamley couldn't cut it as a goalie and gave up goals like she was handing out candy on Halloween. Coach Berg called Alyssa, desperate to find out when she'd be back. Somehow, she thought, "Coach's misery made me feel kinda good," but soon there would be another situation that would rock her boat. Becca Miller stepped up to take her place as keeper and it looked like she was an "up-and-coming star goalie." Even Berg excitedly said she was an "absolute natural." What the? Worse yet, Rick began to look a little more closely at Becca. Like a lot. It was time to join forces with "evil genius," Ruth. Alyssa began to make her move and texted, "want 2 get rid of Becca Miller, will you help me?" What kind of scheme would they come up with to get rid of that "blond, beautiful thief" who was stealing her life?

This is a fast-paced drama of Alyssa "the beast" Duncan's desperate effort to save her goalie position. Of course she also wants to save Becca from stealing her boyfriend, something that makes the story even more tense and dramatic as she scrambles to save her "life." Young readers, especially reluctant ones, will love the tension as Alyssa and Ruth plot to get rid of Becca, a gal they perceive as a major threat to Alyssa's ego and position on the team. The plot is mainly focused on Alyssa's ill-founded angst, but her pain is something that many can relate to. The simple fact that someone just might be better than her is an overwhelming blow. If you have a soccer fan who likes high-action, dramatic reads as fast-paced as a hot soccer game, this is a series you may wish to consider!

Quill says: This action-packed, fast-paced series is perfect for teens or reluctant readers who want a quick read!