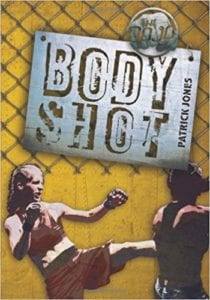 Meghan had always been into sports and the fact that her mom was a coach made it even better. Meghan, Tommy, and Latasha were on a lot of the same teams and were as close as sisters. The accident had changed all that, it had changed everything. Meghan was left without a mother and she only had a few things left: massive scarring, a fierce determination to fight, and a pill habit. Yeah she was into MMA, but the pills kept her pain at bay and thoughts of her mother fuzzy at best. When Mika jabbed at her she “responded with a hard kick to Mika’s right side.” Where was the pain? Meghan’s life had changed and the only thing she looked forward to was her first real fight in the cage when she was eighteen.

Meghan waited for the times Tommy “slipped a small bag of pills” into her hoodie. Meghan was determined to improve her fighting skills and sparring with one of the guys like Hector would prove that she had what it took. Sparring continually with only girls wouldn’t help her at all. She was tougher than that. Mr. Hodge wanted her to try working with Nong or Shawn, but no go. With the Soma in her system, Meghan felt no pain and could go the distance. Her mother’s voice echoed in her brain. “You’re not just an athlete. You’re a champion.” Yeah, and anyone with her in that cage was going to know it.

“You’re totally wired now ... you’re a pill head.” Latasha was no longer willing to hold her tongue. The one-time friendship was falling by the wayside the more enamored Meghan became with MMA and the Soma. The mixture was a lethal one and things would soon begin to fall apart. A Kimura would be enough to enable her to take down Josie. A sudden attack on Josie’s part “swarmed Meghan and showered her with wild strikes, jabs, hooks, knees, and kicks.” The champion wasn’t looking all that hot when a strike got the blood flowing. If Josie Roberts defeated her it wouldn’t look good. Was she really a champion? Or was she simply going to hit that big match by being little more than a pill head?

This is an exiting new series about MMM that young readers will love. Mixed martial arts has been increasingly popular with people of all ages. Meghan, of course, is struggling with a few issues that definitely add to the tension of the story. She has a lot of things to sort out in her young life and as I read I was able to empathize with her. Her character is well-developed and readers will cheer for her throughout the book. This short story will appeal to all kinds of readers from the reluctant to those interested in the sport. It’s action-packed and has just the right amount of tension to keep readers turning those pages.

Quill says: "The Dojo" is an exciting action-packed new series young MMA fans and reluctant readers will be drawn to!