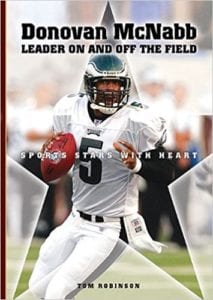 Donovan McNabb is a bruiser, a big tough one. If you think you'll find a tougher man on the face of the earth you'd better think again. He broke his ankle when he was playing a game against the Arizona Cardinals. It was early in the game and he not only continued to play, but still passed the ball and had possibly "the best passing day of his career." McNabb is a Philadelphia Eagle and "has built a reputation throughout his career for playing though pain."

Even though life hasn't always dealt him great cards, Donovan is the type of man who greets the day (and every game) with a smile. His father Sam and his grandmother died of complications from diabetes. Off the field he is a staunch supporter of the American Diabetes Association. They couldn't have a better man to represent their cause.

Early on in his career he dedicated all his energies to football when he was at Syracuse on scholarship and set many records that still stand to this day. He also gave back to the school and, as athletics director Daryl Gross said, "There is not a better role model for any athlete in the country than Donovan McNabb." On or off the field, McNabb has been a team player all the way. Through all the ups and downs of his fabulous career with the Philadelphia Eagles his mother Wilma has been his rock.

Written for the 9-12 reader, this book is one of many in the series, "Sports Stars With Heart." It is very well written and is loaded with McNabb's football stats. It is obvious why this big bruiser is a winner all the way around and has a heart to match his body (and fantastic career). He goes all out for everyone, including his team. "When they look at me, they know I'm going to give all that I have." And he does!

Quill says: Donavan McNabb has heart and so does this book!