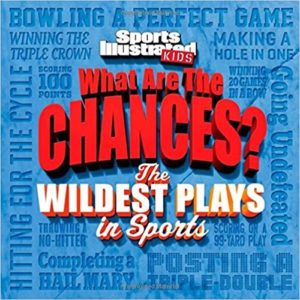 There are bloopers and then there are some of those really mega-cool things that happen now and then in sports. There are rare, really rare, almost impossible, and those close, but no cigar “never happened” events we all wished for. Maybe you weren’t around to watch Micheal Williams in action, but he almost made 100 free throws in a row. Missed it by only three, but Micheal made the record books for something that never happened. Ooooh, ahhh! So sorry, Micheal. There’s another Michael (different spelling) for a super rare feat that probably won’t be seen again any time soon. Michael Jordan scored more than 3,000 points in one season, 3,041 to be exact. Way to go, Michael!

Some people sit around reading record books, but if you watch your favorite teams in action long enough you just might see something that will make it into a book. You into hockey big time? Maybe you were on hand to watch Semyon Varlamov as he “became the 47th goalie in NHL history to reach 40 wins in a season.” That’s one Colorado Avalanche player who no one can put anything over on. How about baseball? Now that’s one sport that has more than a handful of fans. Garret Anderson was some hot when he belted in ten RBIs in a game. If you’re a Los Angeles Angels fan, you’ll never forget that game. Neither will the New York Yankees because that “really rare” feat handed them a loss.

Basketball, hockey, baseball, golf, tennis, soccer, and football are all sports that have those moments we all love to watch. Sometimes those “never happened” moments are just as awesome as the ones that did. Hey, where’s bowling? Yes, that sport is in here too because there’s a lot of fans who watch the players closely. If you love golf and enjoy getting in a few games now and then, you probably have checked out Yusaku Miyazato’s record. Now he “became the second golfer to make two holes-in-one in the same round of a PGA Tour tournament” in 2006. Now that was almost impossible, but Yusaku did it. Twice in the same round probably even surprised him.

Young sports fans and fanatics will love to see their favorites in action. Some are way before their time, while there are other way wild accomplishments they may have seen with their very own eyes. Things are wild and wacky in this book, just what the sports lovers love to see. Of course you don’t have to be young to enjoy this book, but being a kid at heart like me certainly helps. The eye-popping layout with lots of action-packed photographs certainly livens things up. Baseball, basketball, football, and hockey are heavily featured, but that’s where the high interest lies for the intended reader. It’s definitely a fun book that will find its way into the hands of even the most reluctant readers. In the back is an index that will point the way to some of those record-breaking players and those who didn’t quite make it.

Quill says: This book has everything from the rare to the “never happened” wild n’ wacky sports events young readers will love!