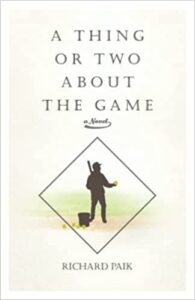 From rising new author Richard Paik comes his debut work, A Thing or Two About the Game. Paik’s novel follows Brad, a smart former biotech executive who has recently lost his job. Through an interesting turn of events, Brad finds himself as the head coach of a softball team for 11- and 12-year-old girls.

Brad, divorced and unemployed with no real prospects, gets a call from his ex-wife Stephanie, asking him for a favor. Her new boyfriend has signed up to coach a friend’s softball team, but his work schedule has suddenly filled up and he will be unable to fulfill the commitment. She asks Brad if he would be willing to fill in as the head coach. Brad’s initial reaction is that he has no desire to help his ex-wife, much less his ex-wife’s boyfriend. After some consideration about the current state of his life, he decides to give it a try, not for Stephanie or her boyfriend, but rather for himself. He thinks that perhaps something worthwhile will come out of the experience, so he’s willing to take the risk and step out of his comfort zone.

Brad begins his practices with the twelve girls assigned to his team, and soon discovers that he has signed up for much more than simply coaching a girls’ softball team. He stumbles upon friendships, rivalries, parental agendas and appalling off-field tactics from both coaches and parents alike. Brad undeniably pours everything he has into coaching the team to be the best it can be. It cannot be helped, however, that Brad simply does not have the highest level of talent with which to work. Some girls are noticeably better than others; others do not appear to be as committed as the rest and do not show up for every practice or game. By the end of the season, Brad, along with his team, have learned lessons about so much more than softball. They have learned how to persevere, how to be a part of something bigger than yourself, how to be accountable to others and how to prove their dependability for others. Of course, during the progression of the season, the girls have also learned a thing or two about the game of softball.

Paik’s debut novel, A Thing or Two About the Game, is an interesting merger between the corporate world that Brad previously worked in and still finds himself teetering on the edge of, and the domestic, familial world of kids’ youth sports. As a character, Brad is relatable to any readers who have ever fallen short of their dreams. Brad consistently feels as if he needs to dust himself off and pick up the shattered pieces of his dreams so he can keep putting one foot in front of the other. Readers will appreciate a genuine character like Brad, rather than someone who seemingly has it all put together.

Paik’s writing is succinct, easy to follow, and the pace of the book moves along perfectly, as it feels like it should. For a first-time novelist, these are often difficult objectives to achieve, yet Paik seemingly accomplished them effortlessly.

Quill says: On the surface, A Thing or Two About the Game appears to be about girls’ softball, but the story encompasses so much more than simply that. It incorporates friendships, rivalries, sportsmanship, teamwork, kindness, competitiveness, and perhaps most importantly, the ultimate, deep-rooted human desire to find meaning in the mundane.

To learn more about A Thing or Two About the Game, please visit the author's website at: richardpaik.com/