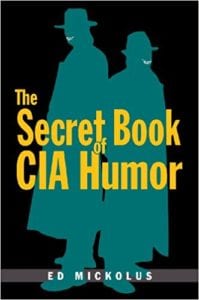 When readers think of the CIA, they envision men and women with sunglasses, black hats, and pressed suits that are so stiff the agents seem to walk like they are being strangled by a twenty-thousand-pound octopus. They are larger than life and know all the secrets that the world has to offer. You feel as if they are tapping your phones, your house, your car - that by just standing in the same room with them, they are clairvoyant and can hear your thoughts, and they automatically KNOW if you ever even THINK of doing anything illegal.

But in this new book, a completely different take is made on the CIA, offering readers a collection of articles that are truly hilarious, and show a side of the CIA that is all laughs, giggles, and odd little quirks that will keep you smiling all day. Told by an actual former CIA operative, these articles absolutely declassify this overly-secret organization so that readers get an inside look at the pranks, jokes, computer tricks and more.

This is a must-read for anyone who is interested in law enforcement OR having a laugh. And some of the ‘secrets’ that are uncovered will blow the mind. One of these secrets is the fact that, before becoming CIA agents, a great many of these very-serious individuals were actually stand-up comics (no lie). And in 1990, these men got together and created a lunchtime Comedy Club using in-house material and, of course, teasing some of the most ‘ridiculous’ leaders known to this country. The jokes they would spew about Bush, Quayle, Perot…I mean, come on…they - like the late-night guys - had more than enough material to keep going. (If you don’t laugh at these, then there is something seriously wrong with you and you need to seek a doctor’s care immediately).

There are also sections that give their own ‘Top Ten’ lists. One of the funniest is when the author and the Agency focuses on dating women and how it has grown tougher over the years. They speak on the fact that women, now, want far more intelligent and sensitive men, and the opening pick-up lines need to be so much better than they used to be. An example of the worst pick-up line ever: “Excuse Me, I seem to have dropped my Medal of Honor. Do you see it anywhere around here?”

There is a truly hysterical chapter that shows what the real CIA would’ve done and the steps they would’ve taken if the blockbuster hit, The Hunt for Red October had actually been real. The author gives a story set up just like Tom Clancy’s, but in a whole new light that readers will find highly amusing. And then there are even miscellaneous items that could not fit into any of the other chapters, so they have a space of their own. Everything from jokes on the news media to the KGB are listed here, and there are lines you won’t soon forget.

The author has done a magnificent job offering the book world a fun - probably more than truthful - look at the REAL CIA. After this, the sunglasses are off, the suits are no longer pressed, but wrinkled, and the ‘scary-looking’ agents no longer tap your phones - they tap dance.

Quill Says: This one will keep you laughing far into the night.