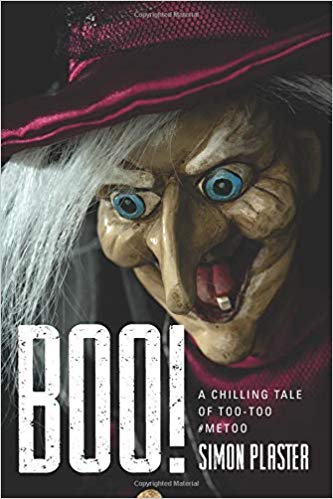 Let us begin with the fact that if you’re a fan of Halloween, this is one cover you are absolutely going to love. And that’s only the half of it, considering the story is fun, suspenseful, and stars a cast that many readers have already had the good fortune to meet and fall in love with.

Her name is Henrietta. She’s a journalist who works for the OKC SCENE News Group, but one day wishes with all her heart to win a Pulitzer for far more serious stories. Alas, for now, she’s stuck reporting on the Oklahoma nightlife ‘scene’ that is most definitely not serious enough to get her recognized...yet.

This time around, we catch up with Henrietta at work, staring at a copy of her resume on the computer screen. Why is she ready to give up? Well, it seems that her new boss, Nigel Fleetwood, has turned into something she didn’t quite expect when he’d first introduced himself. (Or, as Henrietta says, “hisself.” You gotta love that accent!) Anyway, Nigel certainly seemed to know the newspaper business and, upon taking over, did announce that he was doing away with the zone editions that just focused on local nightlife. Instead, he wanted to print a single city-wide paper called SCENE that would also cover real news from around the world.

Unfortunately, after appointing Henrietta Assistant Editor, this weekly paper was revealed as being something even worse than a tabloid. Nigel likes to “borrow” from other papers when it comes to stories for SCENE, and the stories he borrows are amazingly tacky. (Example: Launching SCENE with a post-Christmas edition, the borrowed headline read, “Get the Tart Who Used My Flu for a Loo!”) Henrietta is tired of all this and even more upset when Nigel shows her a recent ridiculous story regarding a haunting in HRH’s palace in London. He tells Henrietta to find a local story that would somehow fit the same premise of ghosts and sexual harassment taking place in a haunted palace.

We then meet up with Wynona Sue Lehough, Henrietta’s mother, who has had a slew of interesting marriages and divorces, to say the least. She’s had to deal with everything from cheating to sexual harassment, and is currently laying on a couch and speaking to her head doctor, Gloria Stern, about her latest issue. Turns out that a producer/director by the name of Deano DeBoffo came into her small town two years ago, having chosen Wynona’s salon, Hair House, to be the setting for the pilot of a reality TV series he was shooting. He had lied and broken her heart back then, and the situation had even caused her own “hotshot journalist” daughter to turn against her. Not only that, but the F.B.I. even arrested the man for murdering an actress with a poisoned spicy meatball at an Academy Award banquet.

Let us just say (not wanting to give too much away) that Deano DeBoffo is scheduled to return. However, even though his visit is on the down-low, there is a ton of gossip and anger as memories and information regarding his sexual harassment attacks rise to the surface. This mogul, nicknamed the “Weinkenstein monster,” will find himself linked up with The Haunted Castle – a run-down dinner theater with an infamous history and a ghostly vibe. (Sounds just like the “local slant” Henrietta was told to look for, doesn’t it?)

Victims of the Weinkenstein monster’s harassment, along with a psychic who will be utilized to call a ghost from the “other side” in order to testify on behalf of the accused, and many more, will all play a part in figuring out if Deano DeBoffo is truly a guilty fiend or an actual victim of a cold-hearted liar who aims to destroy him.

With Henrietta covering the event at The Haunted Castle, it is amazing what unfolds as this author does, yet again, another outstanding job of telling a great mystery. He should also be commended for covering such a hot topic in today’s world as he introduces great characters and a fast-moving plot, while keeping the fantastic Henrietta at its core.

Quill says: This is one series that no reader who loves sarcasm and suspense should miss!