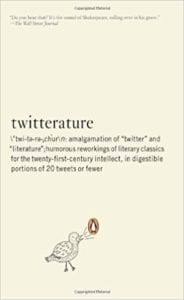 Last night I decided to do a little reading before going to bed. First I read Moby Dick, then I enjoyed a re-reading of Jane Eyre, and I finished by tackling all seven books in the Harry Potter series. Yes, I speed read, but even with that skill there’s no way I could read all those books in one night. No, I didn’t use Cliffs Notes. So how did I read all those books? I spent some time with the new book Twitterature.

The brainchild of two college students, Twitterature combines the simplicity of 140-character “tweets” used within the world of Twitter, with well-known works of literature. No doubt some of the long-dead authors of the classics included in this book (The Iliad, The Old Man and the Sea, The Metamorphosis) are turning over in their graves while at the same time, some serious aficionados of these volumes might very well roll their eyes. However, the rest of us will giggle with laughter.

The authors do a very good job of summarizing every book, zeroing in on the key themes in each. In addition, they inject quite a bit of humor into the stories.

From The Picture of Dorian Gray: “My wish came true! The portrait bears the grimace of my malice. Must hide it in my attic. Fantastic! Who said that art was useless?”

From Romeo and Juliet: “Her nurse asketh if I want to marry Juliet. She is the sun but this is waaay too fast. Am I being punk’d? Where’s Ashton?”

While I wouldn’t recommend this book to prepare for a college test on any book summarized within its pages, Twitterature is none-the-less an hysterical look at over 80 books, from classics to modern, popular tomes such as The Da Vinci Code. For those not well versed in Twitter terms, there is a glossary in the back with common expressions. Parents of young Twitter fans take note: Twitterature contains a fair amount of “colorful” language and may not be appropriate for children/pre-teens.

Quill says: An irreverent look at both classic and popular literature through the world of Twitter.