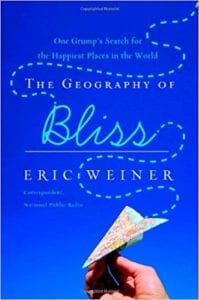 Author Eric Weiner makes a Clint Eastwood-esque double dare to the world: Go ahead. Make me happy. Then he sets off on a continent-hopping voyage to see if the source of a person’s happiness is the same as the source of good real estate: location, location, location. Is it true that the inhabitants of some countries are happier than those living elsewhere? What makes people universally happy? Are there shared commonalities between the happier places? And what is happiness and how can it be measured? These and many other thought-provoking questions wrestle for attention in Weiner’s mind as he jaunts from The Netherlands to Bhutan to Qatar to Iceland and beyond.

Reading The Geography of Bliss is like taking off the year after graduation to go backpacking around the world with the funniest curmudgeon in your class. Eric Weiner is like that freshmen-year roommate who seemed like a total dork at first, but then started to grow on you until he became one of your best friends and most trusted accomplice. With a decade of experience as a foreign correspondent for National Public Radio, Weiner makes the perfect traveling companion. He knows how to find the most unique places to stay, meets the most interesting people, and ends up in the most bizarre circumstances. He’s the guy brave enough to sample the local culinary delicacies (Rotten shark meat anyone?). Best of all, he is really hilarious, so you’ll spend most of this literary trip cracking up at his snarky observations. For instance, in Switzerland he contemplates the beauty of the Swiss army knife: “If only every army in the world was best known for something like the Swiss army knife. As far as I know, no wars have been waged with Swiss army knives, no international commissions established to discuss their dangerous proliferation.” Weiner ruminates on the lack of sunlight in Iceland: “Icelandic darkness is in a category of its own, a stingy darkness that reveals nothing, and if it could talk, would probably do so with a thick New York accent: ‘Yo, ya gotta problem with Mista Darnkess, bub?’” On his high-speed motorcycle taxi ride through Bangkok: “It smells like everything. Freshly cooked pad thai, freshly cut marigolds, freshly produced human excrement. A feast for the nostrils.” If you’re looking for a globe-trotting cohort, a finely-tuned and self-depreciating sense of humor would be the number one quality to look for, and Weiner delivers the goods with generosity.

However, like most traveling companions, Weiner does grate on the nerves every now and then. In each chapter, he insists on persistently turning to, as he calls them, “those dead, white, and unhappy philosophers.” I found it unpleasantly jarring to go from, say, a cozy London flat sharing wine and interesting conversation with a couple of Weiner’s lovely friends to a cold, cerebral lecture on Thomas Jefferson, utilitarianism, and Jeremy Bentham’s treatise on “felicific calculus.” Despite myself, I often would find the discourses to be intellectually compelling once I gave in to them; however, I wonder if Weiner later went back and inserted his philosophical research into the chapters as a way to add some substantive bulk to the book. Though I’m sure his NPR colleagues were duly impressed by the references to the philosophers Betrand Russell, Alan Watts, and John Stuart Mill, I found myself wishing that Weiner would skip the lectures and get on with the show.

Nevertheless, the journey through this book was highly enjoyable, enlightening, and stimulating. The Geography of Bliss certainly delivers happiness to the reader. You’ll be hard pressed to read it without contemplating the state of your own happiness as well as that of your countrymen. Does Weiner ultimately find the happiest place in the world? Of course, I won’t spill the beans. But I will leave you with the author’s acute observation: “The word ‘utopia’ has two meanings. It means both ‘good place’ and ‘nowhere.’ That’s the way it should be.”

Quill says: Read it to be entertained or educated. Either way, it’s a wondrous armchair traveler’s adventure across the globe and into our minds.