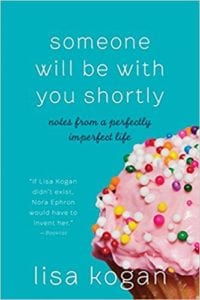 There is a time in every reader's life where they will hold a book in their hands and realize that the author is their soul mate. In this unending world of drama on television, in the newspapers, and simply walking the street on a daily basis and seeing as well as hearing about war, protests, earthquakes, recessions...God knows the world needs to laugh. Hence why He created the hysterical writers who thrive on self-deprecating humor. This book truly brings the reader back to the time of such geniuses with the written word as Molly Ivins and Erma Bombeck - and, for the newbies to sarcasm, think Jon Stewart and Dave Barry.

Lisa Kogan is a forty-nine year old single mother who was blessed at 42 with a little girl. She spent her early life "growing out bangs, searching for a good bra, and wishing she was skinny." She now faces a reality where there is such a thing as shapely clothes even though gravity is not a friend. The love of her life is a man who automatically knows that when she tries to cook a chicken for Thanksgiving that a brochure from the Poison Control Center should be held by a super-sized magnet on the fridge, and instinctively reacts to her questions about life with, "Have you lost weight?" The man of her dreams has given her a stepson, and even though he lives overseas eight months out of the year, they are true soul mates (even though no ring has been placed on her finger).

However, she speaks about love in the sense of camaraderie, friendship, and balance - a person who holds you up and loves you at all times and whose favorite author is not the guy who wrote "Pull Tab to Open" on the top of a can of beer. Lisa delves into motherhood and how it was incredibly hard to have a child, let alone to actually raise it. From essays on the first birthday to the making of blueberry muffins (out of a box so that she can actually hear her grandmother rolling over in her grave), every single word that this woman has put on paper will have readers smiling, laughing out loud, or nodding their head in acceptance and understanding of what a fragile thing life really is.

She speaks about the death of civility - Amen to that - where a world of please, thank you and excuse me has been replaced by the man on the subway with a broken cantaloupe resting on his head. She is a believer that for every bad there is a good and for every pro there is a con, but also lets the reader know that she isn't picky. In fact, there was a time when she would have "dated Ted Bundy as long as it was in a well-lit public place." She believes in urban legends about the romantic men out there in the world, like DiCaprio giving up his side of the door and freezing his behind off so that his love could have her heart go on after the Titanic sank, but remains the sensible woman who has no idea what a bodice is but certainly doesn't want it to be ripped. Lisa talks about the fact that understanding is a good thing but crankiness is allowed for the strong woman. In fact, we should all give ourselves a permission slip that states we are "closed for repairs" and we can spend a few days watching romantic comedies and eating bacon in bed with absolutely no guilt.

And, above all, the essays that offer the truly emotional are something that will bring every reader to tears. There is that part of her that still wishes one night she hadn't been in a hurry to go to a party and instead had stayed home and listened to her Grandmother's stories, instead of coming home and realizing that Grandma's trip to the hospital that night would be the last time she ever saw the woman who could've taught her so much. She loves her dysfunctional family, and makes sure that every time her daughter speaks she lays down on the bed and doesn't miss a moment of time or one single word that comes flowing out of her child's mouth...because there are certain times in life we will never get back.

From the "flambe" incident where she learned that she may not be the best party thrower because some of her friends are still angry that their eyebrows haven't grown back, to the pain and hardship and complete joy of being a single parent, this author has completely "nailed it," saying everything that we all want to say but can't quite put into words.

Quill Says: Any and all out there who are interested in a fresh, savvy, fantastically hilarious point of view on life and all that it has to offer (and take away) will truly love this book.