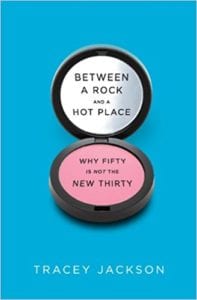 ‘Fifty is the New Thirty’ is a common mantra, particularly among women approaching the half-century milestone. But, argues author Tracey Jackson with great wit and humor, fifty is not the new thirty; it is merely fifty, the big Five-O. So get over it, stop making excuses and get on with living.

Jackson begins her book by looking at how different generations have dealt with aging. Using her own family as a model, the reader meets Grandma Dot, a woman who delighted in eating calorie rich foods, scoffed at the likes of Jack LaLanne, and squeezed her large bootie into a much-too-tight girdle. Facial creams? Forget it, she couldn’t be bothered. She lived to a ripe old age, content with her wrinkles and added weight. Jackson’s mother was the polar opposite, obsessed with aging, trying all sorts of creams, lotions and staying on top of cutting-edge skin and body care at all times. Landing somewhere in the middle, the author admits to fighting the aging process, but never going to the extremes of her mother.

Jackson next moves on to various topics that woman approaching the landmark birthday consider. From colonoscopy to loss of sex drive, she covers it all and often with hysterical results. I found myself in stitches as she described a romantic evening with her husband and a new vibrator. As the couple experimented, the device stopped working. Apparently, one of its parts came loose and fell under the bed where their dog found it and refused to return it. The naked pair got down on their knees, one of each side of the bed, and tried to coax the dog to let go of that piece. Needless to say, the evening was ruined.

Jackson argues, as the title suggests, that fifty is not the new thirty and that the saying is just an excuse so frightened women won’t have to face the fact that they are getting older. Yes, getting old sucks, but you can’t avoid it so deal with it, talk to your doctor about help for certain things (like menopause) and make the best out of a not-so-fun situation.

The author bares all in this book, discussing frankly many topics, such as her fear of plastic surgery. She remembers seeing her mother all bandaged up after cosmetic surgery and vowing to never go under the knife herself. But as her eyelids begin to droop, she starts to think, maybe I should… While many woman might have trouble relating to this (myself included), there were other admissions that had me tearing up, such as Jackson talking about the day her first born left for college.

Between a Rock and a Hot Place is a fast, fun read. I read it in one night, annoying my husband no end as I kept laughing while he was trying to work. What’s so funny? he’d ask. I didn’t share most of the humorous moments with him as I suspect he would find little humor in them. This is a book written by a fiftyish-woman, for fiftyish-women. If you fit into that category, this is one book you should check out. It will put a humorous slant on so many of those annoying age-related “things” we all have to put up with.

Quill says: If you’re fretting about turning fifty, read this book. You deserve a good laugh!